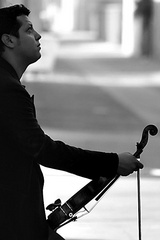 Patrick Contreras Patrick ended an outstanding performance year in 2008 as the opening performer for BB King at Warnors Theatre on New Years Eve. Patrick has been selected as one of the Best of Fresno artists, and was Fresnbeehive.com’s solo artist of the year for 2007 and then again in 2008. He was The Fresno Art Councils featured artist and also awarded a Horizon award for artistic excellence. Patrick has headlined just about every club and theater in the Central Valley and had success. Some of his recent shows include: the Best of Fresno show at Engelmann Cellars, Arte Americas, , Warnors Theater, Tower Theater, Visalia Fox Theatre, Club Fred, Starline (live video filming), Crossroads, Palamino’s, Cellar Door in Visalia, and numerous private parties. He regularly travels to venues in San Francisco and Los Angeles to perform. He performed a concert at California State University Fresno’s Satellite Student Union in February. The CSUF concert was the kick-off event for his European tour which lasted several months in 2008. 2009 is looking to be the most promising year so far with concert dates across the country and a growing fan base.

Fresno's rockin' violinist ready for next step by The Fresno Bee
Violin in hand, Patrick Contreras has vaulted to the top of Fresno's music scene.He's headlined at venues local artists rarely play -- Warnors Theatre, Tower Theatre, Visalia Fox Theatre, Arte...
Violinist's Block Party shows what Fresno can be. by The Fresno Bee
There's something about opening the door of your car and being welcomed by the sound of live music.When I parked Saturday night in the Tower District on my way to violinist Patrick Contreras' block...
p
A
n
E
F
Song Title by Artist Name
987654d
LM
iAnEAqqqq