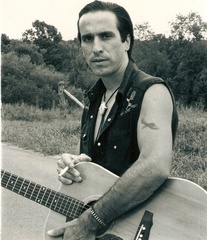 Anyone looking for a nostalgic hit of late 80s alt-country? Do you reminisce about the days you and your buddies planned road-trips to Nashville-town to catch Jason & the Scorchers and Steve Earle? Do Hank III and Shooter Jennings strike you as somewhat privileged? Are you wondering if alt-country is dead? "Yes," you say? Then allow me to introduce you to Pete Berwick.

Berwick is the real deal—a Jason & the Scorchers-influenced alt-country rocker continuing to churn out irreverent country-rock that speaks to the painful truths about life—and when the Nashville music industry doesn't want to listen, well hell, that doesn't make life any easier. Berwick writes about that too. Ain't No Train Outta Nashville was recorded in Nashville back in 1993, then shelved due to the record label closing its doors. In 2007, some fourteen years later, Berwick finally released the record on his own label, Shotgun Records. Slightly dated, but gloriously so, Ain't No Train Outta Nashville is a cross between Cowboy Mouth and The Georgia Satellites. With fiery guitars and Berwick's vocals walking the fine line between alt-country and cow-punk, one spin transports the listener to another time and place. But fourteen years has not softened Berwick; rather, Berwick's edge has grown sharper as he's witnessed the music industry sink to all-time lows. Now, with his own record label, Berwick's garnered enough optimism to release Ain't No Train Outta Nashville and head out on the road in support of it—like the days of old.

If any of my readers answered "yes" to the opening line of questions or if you like real shit-kickin' country music, then don't hesitate to get Pete Berwick's records. And don't miss him on his solo Fall 2008 tour of the Southeast. — Vincent Wynne, Listennashville.com, March 15, 2008