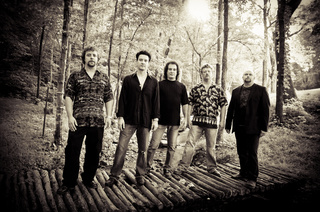 With their mixture of crunchypunk rock and roll and country blues tied around their love of playing long and loud, Redstone continues and expands the boundaries of Southern Rock. Founded by Guitarist and singer Chad Johnson and bassist Randy Prior, Redstone has matured into one of the truly distinctive voices in Rock and Roll today. Redstone has been fortunate enough to play with some of their idols and contemporaries including The Allman Brothers, North Mississippi Allstars, and Charlie Daniels. Johnson and Prior are joined by guitarist Chad Rowland, percussionist Joe Kelly, and drummer Greg Frye. Combined they create the Gumbo of soulful jamming and reckless momentum that make Redstone. With their third album produced by themselves and Kings of Leon engineer Brent Rawlings, Redstone explores new musical areas once again while still paying homage to that which made them what they are.