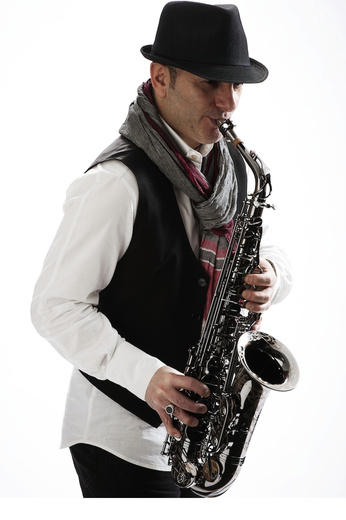 When Rocco was 14 years old begins to study clarinet at the Conservatory of Music of Bari and after four years Rocco got his first gig with the Symphonic Orchestra of the Petruzzelli’s Theatre of Bari, playing with great artists like Luciano Pavarotti, Placido Domingo, Josè Carreras, Katia Ricciarelli.

After graduating in 1983 Rocco begins to study saxophone as self-thaught and in meantime he partecipates to the “clinics” with David Liebman, Michael Brecker, Eric Marienthal, Lee Konitz.

In 1987 Rocco begins to study piano and composition and in 1989 he becomes a member of SIAE as composer.

From the 1989 to the 1992 Rocco playing with the great italian singer Fred Bongusto with who performing in Brasil, Argentina, Venezuela, Australia and in Italy. Besides he appears in many Nationals Channels TV Shows like RAI 1, RAI 2, CANALE 5, RETE 4.

After performing in over 20 different countries Rocco played for hundreds of others records artists for many years and in 1993 Rocco discovers the great saxophone player Grover Washington, Jr. Rocco was captured from the sound and the groove of Grover and for this reason Grover becomes his “virtual” teacher just today.

In 2005 Rocco recorded, arranged and produced the CD "Tribute To Grover Washington, Jr." in memory of the late, great saxophone player. This remarkable CD originally contained only three tracks: "Winelight", "Let It Flow", "Make Me A Memory", ("Mr. Grover" and "Come Morning" were added in 2006) but it was instrumental in making Rocco a household name on Smooth Jazz stations across the Internet! His “Winelight” version has been selected by Sky.fm as one of "The Best Of 2005" along with other 14 tracks. Ventrella continued to create new recordings featuring his own compositions, including the soulful and haunting "I Receive Your Love". The Tribute CD and "I Receive Your Love" brought Rocco to the attention of American producer Bruce Nazarian (Anita Baker, Millie Scott, The Automatix), and an international alliance was born!

The product of that collaboration, a new CD called "Give Me The Groove" is a unique global collaboration, joining together in Los Angeles, Rocco Ventrella from Italy, his longtime friend Renato Falaschi from France, and producer/multi-instrumentalist Bruce Nazarian from the USA in a smooth, yet funky showcase for Rocco's performing and writing talents. After hearing an early copy of the CD, Jimi King, Smooth Jazz Programme Director of www.SKY.fm named "Soulful Strut" as his Number One Smooth Jazz Track of 2006 in the year-end countdown, and placed two additional Rocco tracks in the top 25 including "Alleria", and Rocco's soulful reworking of "Feel Like Makin' Love". Since its official release, this CD has taken internet radio by storm!

"Give Me The Groove" CD obtained quotes from George Duke, Dave Koz, Bob James, Chris Standring and in November 2007 Rocco has been Pre-Nominated for the 50° Grammy Award Contemporary Jazz Best Album 2007.

In May 2006 Rocco has been invited to participate in the "James Brown Festival" in Augusta, GA. and played 2 sets on the same stage as James Brown just two before James Show!

"Rocco is already receiving some well-deserved attention for his debut CD in the form of national radio play. He has a unique sound, a wonderful melodic sense and a great ability to communicate on his instrument. I looking forward to hearing where he goes in future. It looks bright to me". Dave Koz (Capitol Records Smooth Jazz Artist).

The musical integrity, artistry, heart and soul of saxophonist Rocco Ventrella can soon be heard on the album "Give Me The Groove" - his first official solo recording in quite a while - "I've been so busy fulfilling commitments to play or record for other artists or broadcast clients, and recording a solo album never entered my mind until recently. Over the past few years, the desire to express myself entirely within my own personal musical universe has inflamed into a burning passion...".

These days Rocco touring continuosly and giving Master Classes. “I love being able to work with young students and help them improve. There’s no better feeling than to help a player achieve their goal.”

(sound should be crisp and clear on stage and in the audience. Muffled sound

is not acceptable). A sound technician must be available for the duration of the

1(one) stand for alto/soprano saxophones;

1(one) microphone for speaker w/stand.

Rocco's testament to Grover Washington, Jr. by Jazzreview.com
Few jazz musicians have epitomized the sound of contemporary jazz as did the late Grover Washington, Jr. Considered by many to be the savior of modern-day jazz because of his ability to cross the...
Yo, Rocco! by Jazziz April Month Issue 2008
Yo, Rocco!As a smooth-jazz artist living in Italy, saxophonist Rocco Ventrella finds himself struggling in a country that displays no discernible interest in smooth jazz. With that in mind,...
Rocco Ventrella : The Italian "Sax" appeal by Smoothjazznow.com
Rocco Ventrella : The Italian "Sax" appealDecember 20, 2007 - There are few talented smooth jazz musicians coming from Italy. The saxophonist Rocco Ventrella has overcome the challenge and has...
"Give Me the Groove" CD by JazzReview.com (2007)
In my opinion, when performing covers of highly popular pieces, interpretation is one of the most powerful tools to help ensure success. Italian sax man Rocco Ventrella, hailing from Bari in...
Rocco Ventrella Smooth Jazz Saxophone Player by Smooth Jazz Vibes (18 Oct 2005
Rocco Ventrella grew up in Bari in the southern part of Italy. After music Conservatory, Rocco participated in various clinics with famous jazz musicians like David Liebman, Michael Brecker, Bob...
On The Cusp of Being a Star by Jazzreview.com
Bari, Italy’s renown saxophonist Rocco Ventrella says that he wants to move to Los Angeles, California after having fallen in love with its ambience while recording his latest album Give Me The...