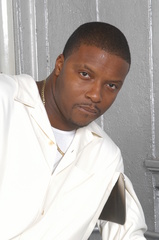 What's up peeps, my name is Rodney Wilkerson AKA "Dafunkyrapsanga", AKA "The N***A they Love 2 Hate", AKA "The Savior of R & B", AKA and "The CandyMan", and I'm from Montgomery, Al. I am an aspiring artist, producer, songwriter, promoter, and music mogul. All I want to do is entertain and bring music back to where it used to be...From the Soul. I've performed all over the USA. Some places are: Chicago, Atlanta, New Orleans, North and South Carolina, Florida, Mississippi, Detroit, New York, Phili, New Jersey, and of course Alabama. I am nationally known for the song CANDYMAN by the former Universal Rap group, Dirty AKA The Dirty Boys, AKA the Pimp and the Gangsta. They are from Montgomery, AL. also.

I recently won the Tom Joyner Skyshow Talent Contest in Atlanta in 2007. I've opened for numerous people. Some of them are: Trina, Ludacris, B2K, The Ying Yang Twins(They are funny as hell), Slick Rick, Too Short, J. Holiday, Kelli Rowland, Carl Thomas, and Kirk Franklin.

I was inspired to sing by my former Minister of Music, The Late Great Andrew Bernard Sneed and enforced by my mother...lol. My early influences weren't from major artist, they were from people at my childhood church like T. Clifford Bibb, Barbara Harvest, and Michael Deramus. My latter influences were Patti Labelle, Daryl Coley, The Late Frank Williams, David Ruffin, Michael Jackson, Marvin Gaye, Barry White, Gerald LeVert, Donny Hathaway, Carl Thomas, and the man who made me change my mind from being a Doctor...the one and only...R. Kelly. To me the greatest performer Today.