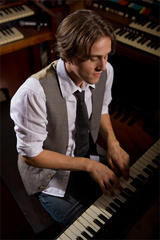 "When it comes down to Seth’s music, either you love it or you've never heard it before.” - CD Baby Seth Glier will grab you...if not with his powerful falsetto or his melodic prowess, then with what Performer Magazine calls his “intoxicating groove.” The 20-year-old singer, pianist and guitarist – who abandoned studies at The Berklee School of Music after one year because he “decided I should be playing for people and not for grades” – aims straight for the gut on his MPress Records debut, The Trouble With People. Glier was raised on the music of Joni Mitchell, Martin Sexton and Jeff Buckley, but considers his brother to be his greatest influence. “My brother is autistic and non-verbal. I learned to communicate with words better once I realized how to communicate to someone without them.” Beginning as an act of solitary creation, THE TROUBLE WITH PEOPLE was recorded in Glier’s basement over the course of three months. In the comfort of his own home and without the constraint of being on the clock, Glier patiently treated each song like a scene in a movie. “I felt as though I was collecting footage for a film rather than recording an album,” he recalls. After carefully assembling a palette of sounds including a string quartet and vinyl scratching, Glier and co-producer Ryan Hommel recruited Alan Evans (Soulive) to play drums on several tracks. The result is an expansive set of songs with lush arrangements that elegantly support Glier’s unabashedly honest lyrics. A Western Massachusetts native, Glier released several DIY albums before catching the attention of MPress Records founder Rachael Sage last fall. Sage observes, “Seth's songwriting is classic, and hearkens back to great piano-based songwriters who broke in the '70's like Billy Joel and Elton John...but he has an impressive range that grabs new audiences immediately, and his sense of melody is incredibly strong.” Upon signing Glier, Sage brought in Grammy® Winner Kevin Killen (U2, Tori Amos, Elvis Costello), to re-mix Glier’s original tracks. Recently featured in The Boston Globe for his “100% Fan-Funded Tour”, Glier is already a seasoned troubadour. He has performed hundreds of shows across the country – including a set for more than 25,000 people on the National Mall in Washington D.C. – and has shared stages with John Mayer, Martin Sexton, Erin McKeown and Cheryl Wheeler. Other notable supporters of Glier's music include acclaimed singer-songwriters Ellis Paul and Livingston Taylor, as well as legendary producer Russ Titelman (Steve Winwood, Cyndi Lauper, Eric Clapton). Livingston Taylor says, “Listening to Seth’s music gives me hope for what’s to come. The next generation is alive and well.” On November 3rd, MPress will release Glier’s label debut THE TROUBLE WITH PEOPLE, featuring 12 original songs. The physical release will be preceded by an October 6th digital-only version, via iTunes. Highlights of the album include the soaring ‘Gotta Get Away’, the Beatles-influenced instrumentation on ‘Naia’, Glier’s commanding title track, and the insightful ‘Someone Else To Crown’. A sophisticated collection that shows surprising maturity and self-reflection, the album weaves understated tales of real people in quiet pain. Maybe the term ‘old soul’ has meaning after all…

Concert Review by Rambles.net
.....But it was a 19-year-old pianist from Shelburne who initially grabbed theaudience's attention. Seth Glier began with "The Trouble with People," anintrospective view of the world that gave...
p
A
n
E
F
Song Title by Artist Name
987654d
LM
iAnEAqqqq