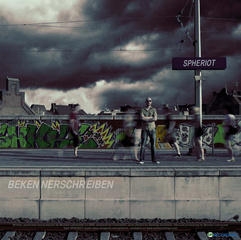 Spheriot is a one-man project - all the music comes from my heart and head and is produced in my livingroom and spare time!

There has never been any kind of concept in the music - or any aim to sound like this or that. It just evolves from the songs I have always been writing on my guitar - and my roots as a "producer" in just playing around with my Mac a little. But somehow it developped to a kind of pop-music that I never expected it to be like - even if there is always one or another song, that doesn't really fit in the picture.

I'm not trying to fulfill expectations. And most of the time it's quite a long process of metamorphosis until I find a song to be ready.

Anyway - this is my peaceful and harmonic counterweight to the deconstruction of musical structures I do with my noise-project Zloty Dawai that you might download on WM Recordings as well.

After playing in some bands when I was younger, I got frustrated by the struggles you have in bands most of the time - the never-ending dream of success, reducing the will to just make the music that develops in the creative process - being lucky findig the right musicians that fit together - and simply the ability to reduce your own egocentric view of your perfect songs. First of all that carried my free spirit to the means of Zloty Dawai - but on the other hand my detail-loving Stubbornness to exactly stick to the songs the way I wrote them on my gutiar, made me play them only for myself at home for some years.

Then came the days of techno and affordable computers and I started messing around a little with cubase on my stone age pc. In the beginnig neither I had any production-know how, nor any equipment allowing me do anything that you would have wanted to listen to. But with faster and more affordable hardware coming up I finally ended up deciding to just try and do one of my guitar-songs with the machine as my band one day. And it worked quite well (at least from my point of view ;). So my first real 100% selfmade song was born. I kept on going and besides producing my guitar-songs still did some purely electroinc tracks until I finally finished my first and only album "livingroom orbits" in 2003.

Then tried to release it on various independetn but still commercial labels and fell back into the real life of pop-music today.

Some of the labels told me frankly, they don't even listen to any demos from artists that don't have media-credibility.

Easy to achieve for someone who can't play live, without being a playback-fake like all the "performers" showing off their asses on MTV, prechecked by casting-shows making teenies believe they need to love em for the suffering and humiliation they have to stand to prove their wealth to be stars. But I guess you know well enough about all that.

Well at last I finished another album - and I'm quite happy being a hobby musisian, if I can at least reach some people on the world, liking my music. Finally that is what being a musician should be about, isn't it?