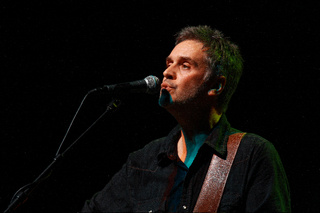 Take someone with a penchant for 60's- influenced melodic pop, played with a 70's folk-rock sensibility; flavour it with a dash of good old 80's-tinged introspection and sense of melancholy. What would you have? Well, you’d probably have a pretentious, nostalgia-obsessed, whiny self-indulgent singer/ songwriter twerp who’s at least twenty years out of date. So, moving along...

Originally from Northern England (admittedly a place where introspection and melancholia are quite rampant), Steve Robinson has been writing and performing in the U.S. for the past 20 years. Although currently a solo artist, he spent the better part of the 80's & 90's performing with Florida-based folk-rockers, the Headlights.

Lending a little Anglo flavour to a decidedly American band with an obvious affection for the Byrds, Bob Dylan and the Grateful Dead made for a few interesting musical sparks, and the marriage lasted a dozen years or so. Along the way the band shared the stage with the likes of The Band, The Grateful Dead, Steve Winwood, the Ramones, Joe Walsh, the Bodeans, the Smithereens, and the usual drunken harmonica players asking if they could sit in; weathered the collapse of their Nashville-based label on the eve of the release of their aptly titled “Test the Spirit” album, and ultimately took their love of the Byrds to the next level by becoming the touring band of Byrds founder/ frontman Roger McGuinn.

Robinson’s relationship with the Headlights proved to be a valuable one, and his exposure to the delights of The Byrds, Gram Parsons et al, coupled with his long-time love affair with The Everly Brothers, fostered a growing fondness for tight harmonies, acoustic guitars, mandolins, harmonicas and the like; sounds that continue to colour his solo folky-pop (or is it poppy-folk?) recordings today.

Comments from old friends back in England, concerned about the Americanisation of his sound (“You sound like a bloody Yank who’s listened to a little too much REM”!)are tempered by the insistence of Stateside colleagues that his sound is distinctly English; more musically sympathetic to Morrissey than Stipe. Certainly, a quick listen to the shadowy, often nostalgic references to his homeland in his songs confirm that while his sound bears the musical imprint of living in the U.S. for so long, lyrically he’s coming from a different place. Closer to Neil Finn than Neil Young; rootsy Americana it most definitely is not. Nor is this closet folkie overtly English in the Fairport Conventional sense. It’s apparent that Robinson is straddling two cultures here; one foot in each camp, so to speak, and appears quite comfortable with the arrangement.

So, British or American; Union Jack or Stars and Stripes-it’s red, white and blue either way isn’t it? Call it folky-pop; call it poppy-folk; call it poppycock if you must. Just don’t call him a pretentious, nostalgic-obsessed-whiny, self-indulgent singer/ songwriter twerp.