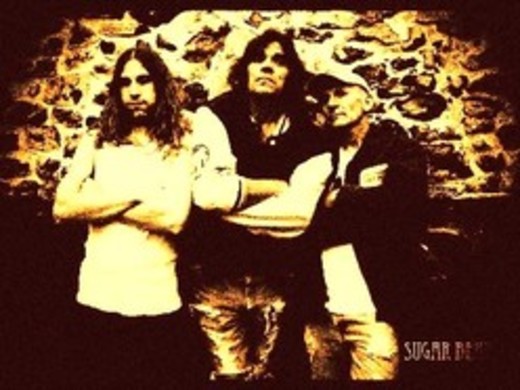 Sugar Bear Trio is a gene pool.
Sugar Bear and brother Ronzo were born in St. Louis Mo. and transplanted to L.A. Mom sang with Buck Owens, Jim Reeves,many others. Dad played in Danny Kays Orchestra and honky tonks.Uncle Andy and Uncle Royce were The hosts of 'The California Hayride' signed to Decca records as The Austin Brothers. Uncle Andy became a successful songwriter in Nashville and Uncle Royce and his daughter Jeanie became 'The Kendalls' winning 4 Grammys and Jeanie sang on Ringo Stars first solo album 'Beaucoups of Blues'.
Sugar Bear played and recorded in N-Sync as guitar player. That was like Stevie Ray bein' with David Bowe.He quit the band and began playing with brother Ronzo and son Kort ,14 at the time and started.
Sugar Bear Trio.
Now!
12 discography
8 ABC Radio Effigy awards, toured USA and 8 countries and heard on the airwaves in 154.
Enjoying touring with national acts and headlining.We have developed a love for the studio also.
Sugar Bear Trio is a gene pool. Listen for us in your town or city!
Check out my professional profile and connect with me on LinkedIn. http://lnkd.in/xB4-ah

“This is a very exciting and provocative group. This group is quite reliable and will delight any audience with it’s one of a kind appeal. Expect great things from the Sugar Bear Trio – they deliver today and for tomorrow with the best harmony, the best great songs and a style that is uniquely Sugar Bear.” August 10, 2009 DJ FEMMIE Jackson ,CEO, OWNER, MUSIC REVIEWER, DJ MUSIC REVIEWS, , SIERRA DONNAENTERTAINMENT

Lamont hired you as a Band ,Entertainer,Producer,Writer in 2009 and hired you more than once Top qualities: Great Results, Expert, High Integrity “Sugar Bear Trio are some of the greatest people I’ve had the pleasure of getiing to know and working with,True professional in every since of the word,Passionate in regards to there Art form, these guy’s are super talented able to think out of the Box and get the Job done.” November 20, 2012

“Sugar Bear is an extraordinary entertainer suitable for any occasion and/or venue. His insight, expertise and experience in the music industry makes him a very valuable contact for our operations.” November 20, 2011 Topcatlive.com

“Sugar Bear Trio is a break team very good team!!! All around 3 great guys! The music is every-one classic and timeless!!! The Entertainment WorldWide Network based in Los Angeles, CA is behind 100% #EWWNRADIO http://ewwnradio.com” July25, 2012

Sugar Bear was always a sideman playing guitar and backup vocals. Touing as N-syncs lead guitar player in studio and live.Touring with acts like the Chille peppers to Gloria Estvan and The Miami sound machine.When his band on the road after 12 years every body went home broken hearted.Sugar Bear landed a job in a hotel on a stool playing acoustic and playing anything some one would yell out.For the first time making money. Another sideman Jim Burmeister was unemployed and joined the act. Shortly after Jimmy Brotherton was added from old N-sync line up and became The Beaver Brothers for 9 years ,doing shows with The Dare Devils ,Van Zants,Head East,Badfinger and so On . By that time Kort Elsworth had became quite a drummer and his brother Ronzo who played Bass had played together since birth and The trio known as Sugar Bear was Born .Openning for many acts,playin clubs concerts,events and yes weddings. We are currently working on demo"s for our new cd.Please let us no what you think.Or just e-mail us . Thanx Sugar Bear Trio

if not we have our own. 2 Audix Vocal Mikes with boom stands. Rug for Drumset.

if not we have our own. 2 Audix Vocal Mikes with boom stands for Vocals preferred. Rug for Drumset

by Tod powers TRP radio
yes..its in the rotation for the few hours of southern stuff I play everday at 12 central time...played it today...send more if you have them...fits the theme very well...good job.On Mon, Nov 3,...
by ABC Radio Network
Sugar Bear Trio ABC Radio Network Airplay. We have 2 songs getting played twice a day on ABC Radio Network.Thats How Love" and "The Lonesome Beaver BluesEnjoy the show now airing on* KGHP-FM 89.9...
by Randy Blumhagen , Founder, Ton
Randy Blumhagen, Founder, ToneStac, Inc. (business partner)“Sugar Bear's musical talent and artistic accolades are too numerous to list here. I recommend to anyone interested in discovering new...
by Ginny Williams , e-Associate ,
“Great new, up and coming band from Arcadia, MO with the style of Blues and Southern Rock. They have a great sound and really just the guys next door. If you have a chance to check them out, you...
by www.meermusic.com
Here's a list of the reviews for "Thatshowlove" by Sugar Bear Trio.11/6/2008: Yes, some good old rock and roll, i can see everyone dancing and singing along to this song, its got that kind of feel...
by Audiocandy Radio
Subject On Air PlayHey folks, got your note (but I'm sorta behind!)If you like, get on over to audiocandy.com and signup as an artist (free). I bet we can hook you up with ariplay in a few...
by Famegames
Your song, 创thatshowlove创 has now moved up to the Fame Games Green Room Area.Very well done!To see the current Green Room Area, go here: http://www. meermusic. com/content/charts/greenroom. aspYour...
by Widemusic Radio
How about sending me your songs and I too will air them. Just send them to widemusic@nycap.rr.com via mp3 attachment. We love to air new artists music. Also you can go to www.widemusic.com and...
by ABC Radio Network
Dear Sugar Bear,Good news! Your song, 创thatshowlove创 has now advanced to the Fame Games Q-Show 206, scheduled for Tuesday on 12/2/2008. Congratulations! Making it to the on-air showcases is a big...
by Vicki: ABC Radio Network
Hi Sugar Bears!First of all congratulations for making it to Tuesday's Qshow with your track "Thatshowlove"! I absolutely love this track! I think you are very talented! Makes me want to get out of...