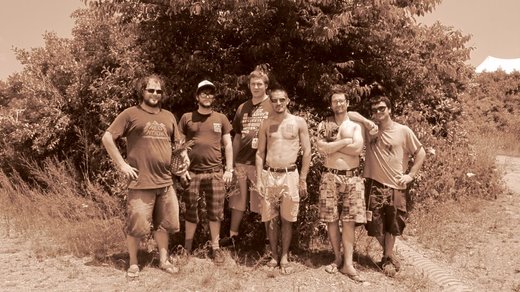 Six handsome gentlemen. One mission. Take over the planet with rock-jamtasticality. What is rock-jamtasticality? It is a way of life. It is a fusion of rock and jam, a sensory overload of pure thrash goodness. These boys live it to a T, vaulting into the local scene and challenging the populace to spend their evenings expanding their minds; twisting, swaying, dancing, and even, at times, frolicking. Superfrog is now poised for a serious spreading of its musical tentacles. Taking over Portland, Boston and NYC will be a mere stepping stone for this grooving six man party-bus. If you want action. If you want to gyrate. If you want to nod your head to a phat beat, slam to a killer solo or stomp to a rippin' baseline. THIS IS YOUR NEW FAVORITE BAND. Failing to experience this live show when it hits your area will be a grave error. These six madcap fortune-hunters are destined for bigger and better, so see them now, have a beer with them after the show, and tell your friends all about it... Superfrog blends pop, funk, jam and progressive rock in this addictive, head-bobbing collection... The overall tone and presentation of “The Year of the Frog” result in a likable, energetic package with lots of fun attractions. --J. EVAN WADE, HomeGrown Music Network From the get-go 'Year of the Frog' is rife with bouncy, funky rhythms that stand up with the best of the nation's many aspiring jam bands. --MATT KANNER, The Wire The name may sound like the next action movie based on a comic book hero but Superfrog is actually a local band making waves in the music scene... Let's see if their Web site has any superpowers... Right away I was impressed with the photos on the site... The design is not bad... The site is really packed with some great content... Just when you think you've seen it all, go to the archive page and check out tons more pictures and videos. --JOHN SHORE, Portsmouth Herald Passion, intensity, drive, focus, humor, family, late night water-slides and a brotherly love and deeply heartfelt respect for our little green hopping swamp friends. This is what comes to mind when I think about the wild musical circus world that is Superfrog. It was a joy and inspiration to help bring this music to life in our months of pre-production and in Rhode Island with Floyd. If the Earth is ever violently attacked by a sea of green I am now prepared with a definitive "no use plan" and a proper soundtrack in hand. --AARON KATZ, Producer

Superfrog at The Blue Mermaid May 9th by The Wire
In many respects, Superfrog is like a live, retro jukebox filled with records hand selected by stoner hippies of the late 1960s. During the band’s two sets at The Blue Mermaid in Portsmouth last...
"Year of the Frog" by The Wire, Portsmouth NH
‘Year of the Frog’by SuperfrogFans who have seen one of Superfrog’s live shows, in which the youthful crew often rollicks through a slate of classic and contemporary rock covers, might be surprised...