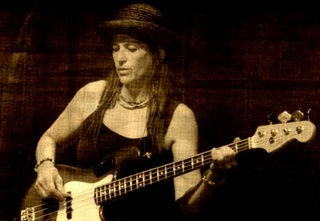 Suzanne Birrell: A soulful blend of JAZZ and FOLK; stirred up with some FUNK & REGGAE; colored with the BLUES; spiced with a touch of LATIN and down home COUNTRY goodness! ROCK solid. WORLD class. Tastefully irreverent. I can hold the audience as a solo act but much prefer to play in a group of two or more. Frequently I will play with just a guitarist or keyboardist in small venues, but I do like to rock the house with added drums and horns. I consider myself an entertainer first and foremost. A performance is like a voyage; First, we bring the people on board-careworn and burdened; Then, we sing of sad times, we sing of happy times, of love lost and love found, we loose them in reverie, and then we rock them! We touch their souls and bring them up to a better plane from which they depart and return to their homes, their hearts a little lighter for the journey. I sing and compose in most styles-Jazz, Swing, Latin, Reggae, Country, Folk, Rock, Funk, Bluegrass. It's a WORLD blend.! Mostly I play the bass when I perform but always welcome the opportunity to shine with just a mic in hand in front of the band. But then, just me and my guitar have made the rounds in many intimate settings. My original songs are drawn from life. Tony, an elderly gentleman from Palermo, Sicily, who worked all his life as a butcher, told me as we waited in a doctor's office that "The sweetest words a man could hear was DADDY'S HOME!" "Forget men; I'M GONNA BUY ME A DOG," was a sentiment expressed by my friend, Donna, after a failed marriage. "I WANT TO THANK THE OTHER WOMAN for taking you away" is Maria's motto for moving on to better times. "If you don't leave me alone, I'm gonna find somebody who will," was a statement by an apparently frustrated man overheard talking to someone on his cell phone and which inspired the song "RUBY PEARL." IF YOU NEVER TRY, YOU'LL NEVER FALL leads me to TAKE ANOTHER CHANCE because there is always THE POSSIBILITIES OF YET!

Rising stars in the Pagosa Scene by The Pagosa Springs Sun
Suzanne Birrell is a New Mexico bass player, who Appenzeller said, "gets" the music and "keeps it all in line." Suzanne plays the bass like nobody ever told her that men usually handle that...
p
A
n
E
F
Song Title by Artist Name
987654d
LM
iAnEAqqqq