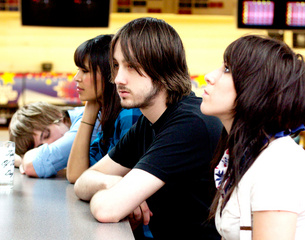 The Black Rabbits formed on a hot winters night in Orlando by brothers Jetson & Skyler Black. Little did they know at the time that what they were creating would take on the essence of that warm winter night. "Our music is a bit of an oxymoron," says lead vocalist Jetson. "It's loud yet soft, edgy yet pure, it has retro elements and modern ones, it's both serious and playful at the same time." Consisting of the two brothers along with bassist Reah Smith and organist Kim Drakeley the group accompanies a mix of classic and alternative indie rock elements with influences such as The Who, The Pixies, The White Stripes, and The Doors.

The Examiner by The Examiner
The Black Rabbits accompany classic chord progression with sensitive lyrics. Their focus, worldly and acute, quietly transcends industry standards and says with a poetic vibe, "I have a conscience,...
Q's House by Q's House
The Black Rabbits take all the best elements of music from the past 40 years and leave listeners with a tune they’re humming days later.
Miami New Times by Miami New Times
There's a feel-good, timeless bounce to the songs that should appeal to Boomer parents as much as twentysomethings in Converse.
SFCritic by SFCritic
In the same way that The Beatle's early music is characterized by short, flawlessly produced catchy rock and roll beats, so too is The Black Rabbits.
Shakefire by Shakefire
The music has a raw energy that you don't often get with production polished rock and roll. But the real hook for every song are the lyrics which are filled with heartbreak and angst.
OurStage by OurStage
Like a train that chugs along and suddenly threatens to go off the tracks, The Black Rabbits brooding, theatrical garage rock makes for an exciting ride.
Central Florida Future by Central Florida Future
Brewed from a cauldron of classic and alternative rock, The Black Rabbits seem as if vials of the musical likes of Nirvana, The Pixies, Jet, Elvis Presley, Bob Dylan and the White Stripes were...
TheCelebrityCafe by TheCelebrityCafe
These songs exude a simple, timeless, and immediately attention-grabbing quality from the first beat… I'll take that over Taco Bell any day.
p
A
n
E
F
Song Title by Artist Name
987654d
LM
iAnEAqqqq