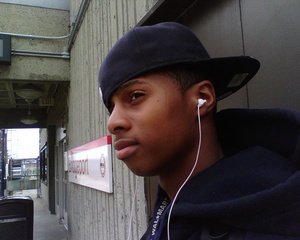 Theory Is the name and Threat is da click. I am 20 now and I have been rapping eversince I was 7 years old. I was born in Baltimore, Maryland and was raised in Bridgeport, CT also Brooklyn, New York. I have lived in many places in New York and in Connecticut and I have even been to many schools in both states but anyway. I have been a Crip Gang Member ever since I was 7 also so I have been in the gang Credentials for about 11 years. I got my name from my cousin Khalid Rest In Peace before he was murdered in Atlanta, Georgia by the police on some fucked up bullshit they tried to put on him. Anyway I used to be called C-Dub at one point in time but then I started to be like this fuckin name is'nt mounting out to become anything so then one day I got a phone call from my cousin and he explained to me what the name Theory meant to him and I fit the script for the name. I ended up changing my style of flow and my name at the same time.

The name Theory itself is like a thought or like a myth that you as a person well all of us as people think. I chose the name not just because it sounds hot but at the same time it is a mysterious name that fits my character and tells a story about my in's and outs of my life.
p
A
n
E
F
Song Title by Artist Name
987654d
LM
iAnEAqqqq