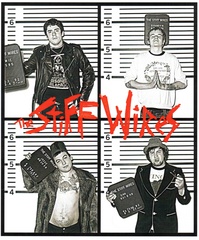 Not Just Another Generic Canadian Punk Band:• Over the last decade or so the Canadian Punk Rock Music Scene has become just more of the same stuff using a generic group of different faces. One can hardly tell a Simple Plan from a Sum 41 or a Billy Talent. Then you have a Canadian Idol Pop singer grab a hold of the formula and there you have what most people in the world think punk rock is in Canada, a bunch runny nose possibly rich brats who dress funny putting the face on Canadian Punk Rock. Punk Rock really isn’t defined by a sound as much as it is defined by a way of life. Punkers shop a Value Village, and not the Gap or West 49. Yet you wouldn’t know it by the face of Canadian Punk. This genre of music in Canada has been crying out for something different for a long time. It’s time to stop crying.• Ladies and Gentlemen; The Stiff Wires. Anchored by powerful yet equally rhythmic bass lines The Stiff Wires have in fact created a new sound in the Punk Music Genre in Canada. No flash, no boat shoes, drum pieces falling over The Stiff Wires play with a Water off a Duck attitude. The Stiff Wires started out as two different bands about 6 years ago while all of its members were still trying not to get beat up at school for their funny hair and look. Josh McQuaid, and Jamie Barber where part of a three piece semi Hard Core Punk band called Societal Hemorrhage, and of course it’s spelt wrong. They were punks not scholars. Jesse Fleming, and David (Jared) O'Rourke came from a semi Hard Core Punk band called The Miscreance yes they thought this spelling made it plural yet it just made it wrong. Simply put these kids were straight up born to be punk. At first Jesse replaced the current drummer in Societal Hemorrhage, and Jared was brought on as an additional guitar player to fill out the sound. Josh sang and played bass while Jamie handled lead guitar and backing vocals. After a short time like this it became very evident that this direction was the right one for these young men, and their next three moves would define their music direction for a long time to come.• A few months after this new band was formed the band would unknowingly make what would be its most crucial personal change and create what is the Stiff Wire sound. Josh McQuaid handed his bass duties off so he could focus on being a more committed front man. Dan Ormsby joined the band taking over as their official bass player and bringing a trained musical background along. Just like John Entwistle himself Dan is a man of few words, yet his bass playing speaks volumes of his abilities. Add in the crisp and snapping drum sounds provided by Jesse Fleming and the sound seemed to develop itself from there. However this was not to be the last change, with the addition of Dan the band needed to change the name. After trying out a couple of names that seemed cooler when they first heard them they finally settled with The Stiff Wires. Due to very tough and almost impossible travel constraints David (Jared) O'Rourke made the tough decision to leave the band later that year. This would prove to a blessing in disguise for The Stiff Wires as it would bring Brandyn Walkom in as their rhythm guitar player and the final missing piece to The Stiff Wire sound. The latest move by The Stiff Wires has Josh McQuaid exiting the band to persue other ventures and a different musical and artistic direction. Instead of injecting a new front man into the band The Stiff Wires have drawn on the talent pool within the band and all the vocal duties are currently being shared by Jamie, Dan, and Brandyn. It seems the right move as their new material is just awesome and more in the direction the four remaining members want to take. Performances Achievements: The Resume: • Awards  Won 1. The Toronto Independent Music Awards 2008- Best Punk Band Nominated 1. The Toronto Independent Music Awards 2008- Best Punk Band 2. The Ontario Independent Music Awards 2008- Best Punk Band 3. The 7th Annual London Music Awards 2009- Best Punk Band • Music Releases/Compilations  3 Underground Independent releases.  Appeared on Music for Peace Vol. 2 as Peace Drum • Accompanied/In Support 1. D.O.A. 2. SNFU 3. Subhumans 4. The Misfits 5. Helix 6. Forgotten Rebels 7. The Queers 8. The Real McKenzies Additional list available.

London Music Awards by scenemagazine.com (link)
The Stiff Wires will be performing at the 7th Annual London Music Awards Presented By Scene, and will be performing on the same stage as Canadian Music Legends Helix. Also performing will be The...
CLUB SCENE: Reinvigorated Stiff Wires to rev up Ca by The London Free Press
Lori Mastronardi, Anna Coutts and Brian Wong Sun Media September 3, 2009 Our dirty, old-school punk revivalists The Stiff Wires are in its infancy, but they've already made adjustments. A few...
p
A
n
E
F
Song Title by Artist Name
987654d
LM
iAnEAqqqq