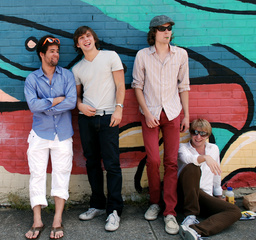 The summer of 2006 was a magical time- four high school friends decided to combine their love of music and creative drive into a musical entity, entitled: The Turf. With modern influences such as The Strokes, Arctic Monkeys, Kings of Leon, and The Rapture (as well as oldies such as The Beatles, David Bowie, Pink Floyd, Led Zeppelin, and Roxy Music), we sought to create an edgy, indie rock sound that maintained a heavy dance feel as well as catchy melodies. Above all, however, we simply wanted to make people dance.

We spent the rest of 2006 and beginning of 2007 developing our new sound, and recorded our first EP, “To The Disco”, in March, 2007. Confident with what we had produced, we began to play a number of live shows, one of which was Grimey’s Cinco de Mayo Sale at local record store “Grimey’s”. Our live appearances took off that summer, and we were able to spend more time writing and searching for inspiration. Unfortunately at the height of buzz in Nashville, higher education called, and we ventured off in our separate directions.

Determined not to let a great thing fade away, we stayed in close touch, holding several meetings online each week to write. Our survival is truly a testament to our commitment to music and love for art. We kicked off the New Year with a highly anticipated show headlining at the Mercy Lounge. In March, we traveled to Los Angeles to play The Knitting Factory. With a growing online fan base and new opportunities opening up every day, we’re more than ecstatic to get back to Nashville for a full three months of writing, recording, and playing out. Keep your ears open.

May 2008 College Battle for the Roo