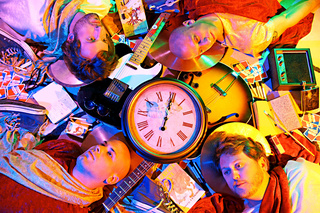 The Whiskey Saints are a four-piece alternative rock band based out of Los Angeles, California. Blending elements of popular music from the past 50 years with major influences from both southern/roots rock and contemporary indie bands, the guys are known for their explosive live sound and great songs. They released their first full-length studio album entitled "West" in October 2008 and are currently set to release their sophomore album "24 Hours" on June 7th, 2011.

Radio Interview with Off The Sunset Strip by
This is a radio interview we did a few months back to discuss The Bootleg EP's worldwide release, our influences, living in Los Angeles and the best place to buy cheap cowboy shirts in the area....
p
A
n
E
F
Song Title by Artist Name
987654d
LM
iAnEAqqqq