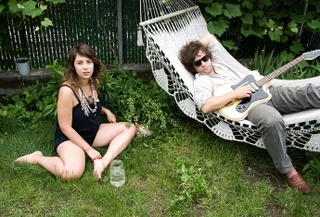 Listening to This Frontier Needs Heroes is like having Brad and Jessica play in your backyard while the sun comes up. With their powerful delivery and delicate harmonies; their songs are full of personal stories of love and longing for a better world. They have played hundreds of shows across the US and UK with Kath Bloom, She Keeps Bees, Arbouretum, Tallest Man on Earth, and The Handsome Family including several UK festival appearances. In 2010, they used Kickstarter donations from their growing fan base to fund their follow up album. They decided to leave the studio for a more intimate approach and recorded in an old school house in Wassaic, NY, with engineer Justin Pizzoferrato. The Future" has wild new songs about all of their rambling experiences including new visions about space, family, heroes, history, and dogs. Now available in CD, MP3, and VINYL includes album art in 3D!

Microphones and a Positive Attitude