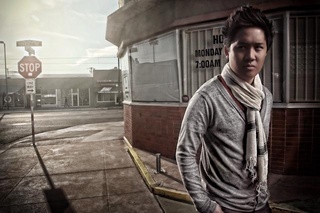 I don't regard myself as the best at what I do but my hope is that what I'm doing is natural and honest. My music reveals what's on the inside and all I want is for everyone to open their eyes and ears to something new . These songs and words are reminders of where I stood in life and where I stand today. It's just me being me.

2 Mics, 1 for Guitar Amp and 1 for Bass Amp
1 Vocal Mic
1 Direct Input for Acoustic guitar
3 Monitors, 1 for each member
3 Electrical Outlets near each member on the stage

Interview with Stitched Sound by Cynthia Lam, Founder and Interviewer
Interview available in the September 15th Issue with 'The Fairline' on the cover.
Interview with Jordan Laughlin by Jordan Laughlin, Junior Editor
Chandler native and Corona Del Sol ’07 graduate, Torin Dinh, is new to the Phoenix music scene and is all ready a success. Dinh describes his sound as Pop Rock Acoustic and is influenced by Howie...