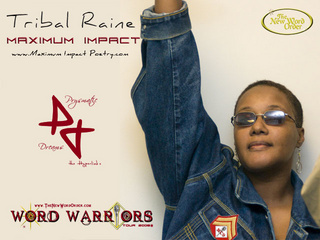 * Tribal Raine is dynamite wrapped in flowers. She walks in pretty as a picture and then explodes.
As an accomplished Spoken Word artist in her own right, her forte is primarily the written word by preference. Indeed she exudes a powerful and experienced presence on any stage. Tribal Raine is a multi-recorded and published artist whose works have been used as teaching tools for poetry college courses. On stages from Vegas to NY, her presence has been felt in all it's quixotic creations.

Tribal is the creative genius behind poetic anthems like~ The Revolution Poeticized ~ (The poetic clarion call of our day) &
F*ck Him If He Can't Hang ~ (The single mother's anthem). She is another, a wife, a sister and a poet in all aspects...
She is Tribal Raine.
With her husband and partner Max Parthas these two Prysmatic Dreams Poets and NWO artists are certain to make: