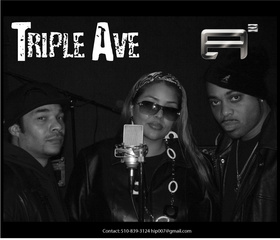 RapWorld.com-Forums by RapWorld.com
What is the best live act you seen lately? That gets the crowd live or people thinking, or anything? Or rate the top performances you've seen that we can catch. From the perspective of this female,...
The Trials, Tribulations and Triumphs, of Triple A by BeyondChron San Francisco
Bill Macbeth's fabulous little club, The Ivy Room in Albany, has seen it's share of musical diversity; blues, rock, folk, and even experimental. San Pablo Ave. is no stranger to a rich musical...
Music Shopper Forum by Music Shopper Forum
..............Triple Ave is comprised of three survivors of cult hip-hoppers the Subterraneanz - rapper/producer Hyp, a product of Bostons rough-and-ready Roxbury neighbourhood, rapper Louie da...
CD Baby Reviews by CD Baby
The tracks on this album are sick, and def. bring something new...I caught this act live randomly in SF, and was blown away by the energy + creativity. They bring instruments not typically used in...
p
A
n
E
F
Song Title by Artist Name
987654d
LM
iAnEAqqqq