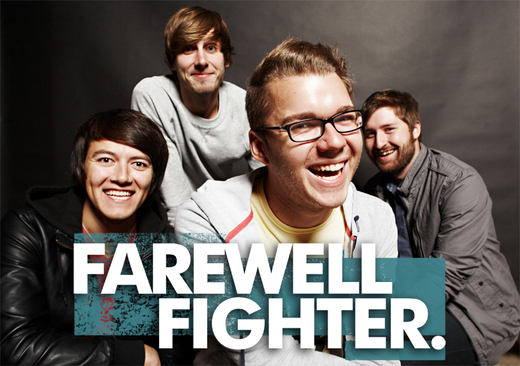 Most individuals would think twice before giving up all their physical belongings, cutting ties and risking homelessness & starvation. In 2011, Nashville pop-rock quartet Farewell Fighter did just that. After topping Alternative Press Magazine’s list of 2010’s top unsigned bands in North America, the band decided to take things to the next level by scheduling show after show in self-booked, self-funded tours across America; ultimately spending the next 12 months on the road playing 150+ shows in more than 40 states and selling more than 5,500 copies of their latest self-released EP entitled The Way We Learn. With an undying passion for their trade, vocalist Kenny Fleetwood, drummer Matthew Hooper, guitarist Lee Morton and bassist David Jahns seem to be the scene’s poster-boys for the ‘look what I can do’ attitude. While most bands in their genre struggle to create honest and catchy songs, FF do it track by track — and they’ve managed to stay humble doing it. Giving up everything you have for the good of a dream has a way of putting the world into perspective for a young artist. Feet on the ground, eyes on the prize, the sly foursome aren’t showing signs of slowing down. On-stage antics reminiscent of a band operating on a much bigger budget have earned them appearances with peers such as The Early November, We Are The In Crowd and Hellogoodbye.In a convoluted music scene full of GarageBands and auto-tune, Farewell Fighter are hell-bent on proving that you don’t have to be pretty or have a record executive for an uncle just to be successful. They’re doing it through their music — and they’re doing it well.