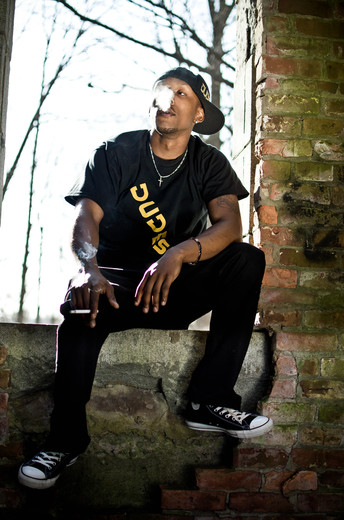 "I haven't been shot 9 times and I'm not gonna teach you how to dance, I'm addicted to red bull and Newport’s and that’s what it is"

- At first glance Fitted may not seem like your average Hip-Hop artist and he will tell you he's not. "I don't even refer to myself as a hip-hop artist, I always throw Alternative in there, you see all these other artists they all want to be each other, I turn on the radio and hear the same song rapped 10 different ways, I ain't about that, you're not gonna hear me come out with some weak s*** just so I can sell a bunch of ringtones and make a quick buck, I'm here for the long run, all the greats, all the artists that inspire me, were in it for longevity." Take a look at his resume, and you will see what he means. Starting in January of 2011 when he obtained an opening slot on Wu-Tang Clan's Rebirth tour, Fitted began to build his credentials. For the next year on top of a slew of local performances in his hometown area, Fitted also shared the stage with other national acts such as G.O.O.D Music's Big Seanin April 2011.

Linking up with his manager James Jones of Warner Music Group, Fitted came into the New Year on the heels of over 30 shows and a lot of buzz along with regular rotation on radio stations locally and numerous radio interviews at WAJZ -JAMZ 96.3-, WCDB, WVCR -88.3 the saint-, and WRPI. "I love my city man, and they love me back, I'm gonna put 518 on the map, but I'm makin sure I do it the right way, I'm going to make Upstate New York a staple in Hip-Hop." Fitted kicked off 2012 with a headlining performance along with 2012 XXL Freshman Roscoe Dash. "Roscoe was a cool dude, he came up here he showed the city love and we both put on a hell of a show, the fans loved it."

But the buzz didn't stop there, in March 2012 after hearing his original song "Counting Sheep", Platinum selling and Grammy Nominated Hip-Hop group The Nappy Roots, reached out to Fitted to do a remix to the track. On March 16th after shooting the video, Fitted headlined a concert along with The Nappy Roots, and performed the Remix live with them.  Currently fitted is hard at work in the studio working on future releases and preparing for future shows. Updates coming soon.