Born Ja\'Cory Cortillian Worsham in Port Arthur, TX, Ja\'Cory Lavine was raised between the cities of Whiteman Air Force Base, Missouri, Los Angeles, CA, and Galveston/Houston, TX. As a child, Ja\'Cory was very artistic. Often inspired by his older sister, Janay Worsham, he would draw, write, sing, and even act. As a result, Ja\'Cory is not just your average artistic teenage musician with a head of hair that can be recognized immediately (Especially when confined under a beanie), but he also has more brains than a scrawny, creative 90\'s kid could have.

His interest in music began when he was 11 years old. His mother, Rhodessia Hemphill, has been singing since she was a child. Brought up in the church by her minister father and religious mother, she learned to discover her own voice. Ja\'Cory loved to listen to his mother\'s soulful take on songs she had both written and covered. However, it had never occured to him that he could be musically inclined until one day, when his older sister, Janay, let him hear a few demos she and a few high school classmates had recorded, mixed, and produced on their own. Hearing his older sister rapping was new for him, but it inspired the artist he is today. He started out writing raps, aspiring to be like his older sister. He listened to rappers like Ludacris, Plies, Eminem, and Andre 300. Later on, when his little sister, Fadria Lavine, had developed a singing voice of her own, he decided to sing. He wrote songs, downloaded his first recording studio software onto the family computer, and let his imagination soar.

While there were plenty of alternative rap songs created by Ja\'Cory, he decided to stray away from rapping to try singing. With Disney Channel stars like Demi Lovato (La La Land), Mitchel Musso (The In Crowd), and Corbin Bleu (Push It To The Limit) appearing on his TV screen at home, he dove into adolescent pop songs until the accidental birth of his first rock song. Inspired majorly by the band, Paramore (Ignorance), he found a new interest in the genre itself. Bands such as Conditions, The Mission In Motion, Fall Out Boy, and Linkin Park became his new aspiration as far as music goes. His next attempt at music was buying his first acoustic and electric guitars, recruiting his best friend, Marlon Castro, and his good friend, Pablo Martinez, and forming the band, "Shipping and Handling", formerly named, "Sanity The Band". With Pablo playing drums, Marlon on rhythm guitar and keys, and Ja\'Cory on lead guitar, keys, and vocals, they thought they were on their way to becoming the new band in town... or in Ja\'Cory\'s mind, the Paramore of Wilmington, CA.

Later on, in the Summer of 2010, Ja\'Cory moved with his mother and younger sister from his life and band in Wilmington, CA, to Galveston, TX. Ja\'Cory spent his 8th grade year at Central Middle School, where he was determined to start over with his music career. Though, still young and inexperienced, his ambition sparked a flame that seemed impossible to contain. Ja\'Cory was determined to form a band, so when he met his new friends, Macy Jordan, Cassie Olguin, Eric Gonzalez, Dane Nguyen, Kyron Huey, and Matthew Worthen, they immediately formed the band, "Drowning at Dawn". After his 8th grade year, the band had lost numerous members by the Summer of 2011. At that point, Ja\'Cory\'s friends, Cassie Olguin and Andrew Guidry were his new bandmates and helped form the trio that still underwent the title, "Drowning at Dawn". Ja\'Cory moved to Alief Houston, TX before their freshman year in high school, making trips back and forth between Galveston Island and Houston to record a few songs. They released the "Your Honor" single in September of 2011, followed by the "Hidden EP", a record containing 7 songs about growing up, keeping secrets, and being yourself, on January 19, 2012. The EP had been sold on Amazon, iTunes, and many other online stores and they had even gathered quite a following with support from friends and classmates. Almost immediately afterwards, they re-recorded two demo CD\'s that were originally recorded when the band originated back in 2010, called "According To Us", a full-length record, and the "Simple EP". While those were not as widely sold as the "Hidden EP", they still went on sale on minor websites such as bandcamp.com.

In the Spring of 2012, Andrew Guidry had left the band, leaving Cassie and Ja\'Cory to become a duo. With a few hard, conflicting feelings, they went on to write one last album throughout their sophomore year in high school (Late 2012 to early 2013). They wrote a total of 18 demos that were to be released on an album under the brand new band name, "Erasing Insane". They thought this new change would be the next step in their duo-band career, but with their junior year of high school arriving and life becoming more of a reality than a song, things changed and the band quietly underwent a break up.

Later, Ja\'Cory moved back to Galveston to finish his junior year, where he would rejoin his old classmates from the 8th grade. Though Cassie and Ja\'Cory remained best friends without their band to occupy their time together, Ja\'Cory felt the need to keep making music. With a new found interest in different genres of music and synthesizers, Ja\'Cory continued to make unreleased music until one day, he decided to release a single song on his YouTube channel and Soundcloud.

Inspired by one of his favorite shows, MTV\'s Teen Wolf, Ja\'Cory wrote, recorded, and produced "Like A Stranger" with hopes of it being on an episode of the show. But there was something different about this song in particular. Compared to the alternative punk rock people were used to his band/duo releasing, Like A Stranger was dark, eerie, and unique, giving it that Teen Wolf vibe. Pleased with this new sound he had perfected just for a fandom he was apart of, he experimented with the new electronic pop sound, thus creating his new solo project, "Speak.". He went on to record a music video for the single and post it on both YouTube, MTV artists, and more. After he had recorded just enough songs with his new sound and purpose in music, he decided it was time to let everyone else hear him once more. 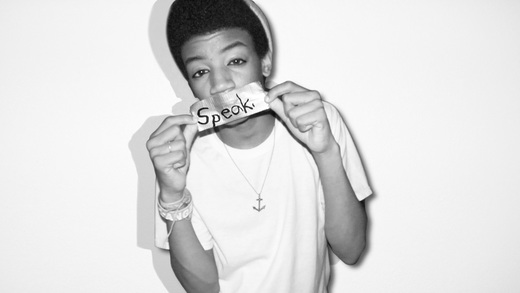