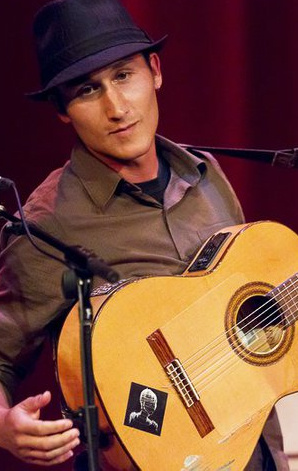 Hailing from San Francisco, California, Justin Ancheta is a music making, social changing, conscious spreading, teacher and artist. His eclectic style of reggae flavored indie-rock, funk and jazz is a down-to-earth and moving music with lyrics that reveal his passion for community, awareness, and change. Ancheta has opened for the Wailers, Creedence Clearwater Survival, Charles Neville, Ricky Skaggs, and numerous other internationally renowned artists. While attending Sacramento State University on a soccer scholarship for four years in early 2000′s, Justin studied Environmental Science and Music while fronting the acclaimed band “Sinclair” and later “Pills & Jackets”, nominated for numerous Sacramento Area Music awards as well as winning the CSUS Battle of the Bands. While still keeping up with performing, Justin has been involved with music programs and after school programs to help pass meaning and culture through his music and love for nature. Ancheta was a featured artist at the Hawaii Spirit Festival on North Shore Oahu in 2010, featured artist at San Francisco’s premier Jazz club, Yoshi’s, as well as the Red Poppy Art House, and continues his career both at home and abroad. He recently just got back from an international music bike tour with the Pleasant Revolution, as one of the headlining artists for Barcelona’s first BMF. On his off time, Ancheta has worked and volunteered with Grid Alternatives & Bay Solar, earthship biotectures and other projects encouraging the knowledge and use of Alternative energy and simple living practices. Justin has played music to encourage art and culture at schools throughout Northern California, focusing on the concept that we can be the change we wish to see. More information @ Justin Ancheta . com – For booking please contact: booking@soulgraffiti.info