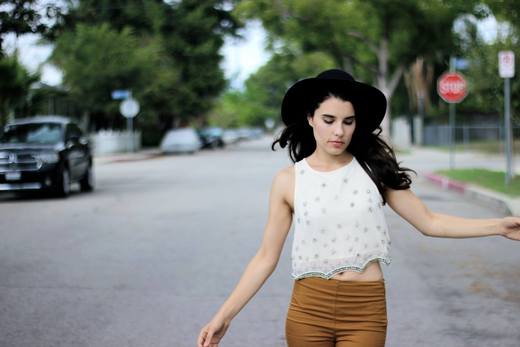 Kris Angelis is a radiant singer/songwriter who writes lyrics that read like poetry (“the rain turned to lace on the first day and the last day that I was a child”) and delivers harmonies imbued with a sense of longing. She names Brandi Carlile, Ray LaMontagne, Hanson, Rufus Wainwright, CCR and David Gray as influences to her acoustic folk-rock sound, but adds that everything in her life influences her music. Music has always been part of her life. “I started singing when I started talking,” Angelis says. Growing up on a 45-acre hay farm outside Gainesville, Florida, Angelis spent her days riding horses and playing with her identical twin sister, which she reminisces about in Remember the Rain. “We made up little songs in our tree house,” says Angelis. “It was a great way to learn to harmonize because our voices blend so well.” As a child, she played violin and sang in her church choir. She learned to play guitar when she was 19-years-old. “When I began playing guitar, I really started writing a lot of songs,” she says. In 2005, Angelis released Brief Sounds a four track EP of her original songs with the help of Tim Hanseroth (Brandi Carlile, The Fighting Machinists). Angelis played guitar and performed vocals while Hanseroth provided backup on guitar, bass, synthesizer and percussion. And she released a second EP in 2008 titled Ghost in the Corner which includes 5 new tracks and one hidden track (shhh*). In the past two years, Kris as joined forces with fellow singer/songwriters and friends to form a group called TMG which stemmed from the girl's mutual love for the Twilight books. These 5 talented ladies write and perform songs inspired by the story that has become a cultural phenomenon using poignant yet subtle lyrics. They have been touring the country, playing at premier events and have released two collective albums, "Twilight Music Girls: a compilation" and "La Tua Cantante" which have captured the attention of the likes of MTV, Reelz Channel and the LA Times. Acting since age 11, she has studied with master teachers from Juilliard and Tisch School of the Arts in New York City. Along with her twin sister Alix, she has made numerous television appearances including a Pizza Hut commercial and more recently a guest spot on the NBC series Studio 60 on the Sunset Strip and BONES. Angelis draws on her acting ability to express emotion in her songs. She bluffs her way through "I Wish" telling a convincing lie whose truth is revealed at the end, whereas she conveys complete candor on Brief Sounds (“I looked all around for you so I could pretend that I didn’t care that you were there”) No Place Like Home addresses regret (“I walked through the smoke and I coughed and I choked, when I could have sung out instead”) while it also imparts hope (“I’ll take another step in the direction I’m going”) Currently performing regular gigs, Angelis is wowing audiences across the United States with her gorgeous vocals, clever lyrics, and powerful melodies and she's having a great time doing it. Says Angelis: “I’m very excited about this part of my life!”