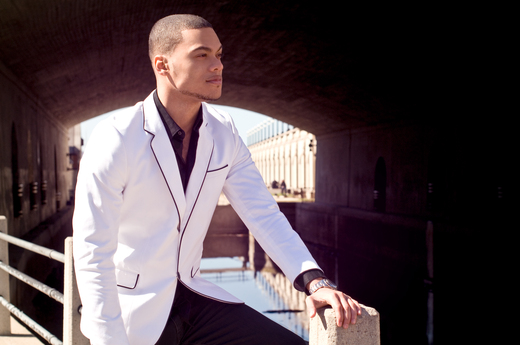 With awe-inspiring vocals, Yuri Koller (Formerly known as "Lokz"), is an unnaturally talented vocalist, songwriter and producer from Toronto primed to launch his career. Yuri captures the soulfulness of his influences, Lauryn Hill, Stevie Wonder, Luther Vandross amongst others from the era, as well as his parents (Arlene Duncan and George Koller) both musicians, but interprets it with his own passionate hunger. Those influences have helped construct his intrinsic sonic creations and a powerful release of his inner most secrets, feelings and emotions. All of which will be heard on his debut album "Point of No Return". Singing since the age of 5, Yuri realized his passion for music, which has now taken on a life of its own. Encouraged by the praise of his peers for his craft, Yuri stuck with music. Originally, he began working on tracks with friends writing hooks, and assisting with production, before crafting his own compositions. At first he attempted the more conventional route by attending the Trebas Musical Institute for two semesters, before realizing that his desire outgrew the size of a classroom, as it was confining his ingenuity and stunting his growth. It is however, perhaps this lack of traditional training, that helped mould such a focused, driven artist, that stands out from the rest of the formally trained bunch. The Remix Project, a competitive government funded program based out of Toronto, afforded Yuri the opportunity to collaborate with some of the cities best producers, singers, rappers, artists, promoters and so much more. This is where his vocation was really elevated to the next level. It was there where he was able to work with Drake's producer/engineer '40', as well as form an amazing working relationship with his now 'own' producer/engineer Pro Logic. Yuri's first major recognition came when he was featured on Saigon' "Warning Shots 2" album, on the song Fatherhood (Rayne Dior), in which Yuri had a verse and hook, both of which he also wrote. The song was posted on almost every major blog, website, and received critical acclaim across the board as a beautiful song. Recently, Yuri was one of the featured artists for the "One Night Only" artist showcase held in Toronto, in which he performed for representatives from Universal, Disturbing The Peace, EMI, and Flo-Rida's International Music Group. In addition to this, Yuri was also one of the opening acts for Diddy's 'Day 26' band, which took place at Toronto's biggest night club 'Circa'. Even greater, Lokz won an online contest out of thousands of entries on Ourstage.com for his chance to open for Drake, Jay Z, Eminem, Bun B, Young Jeezy, Rick Ross, Fabolous, and others at Drake's 1st annual OVO Fest at Toronto's Molson Amphitheatre during Caribana 2010. Yuri has also had the opportunity to record on tracks with Joe Budden, Joell Ortiz, Royce Da 5'9", Tona, P.Reign, JD Era, Kim Davis, Solitair, Rich Kidd, Redway, Haley Small and a multitude others, as well as work with producers such as Boi 1da, Beat Merchant, Y-Not and many more. With all of this recent work, features and performances, helping to build up the name, it is now time to focus on Yuri's debut album "Point of No Return" which has already been recorded, pressed up and currently being shopped around, to be released in 2011. The album is an honest depiction of Yuri's life, and tells a story of his experiences, summing up his existence, and bringing it to you, in an authentic, trustworthy fashion, while helping craft his way into the industry, as one of the next stars of R&B