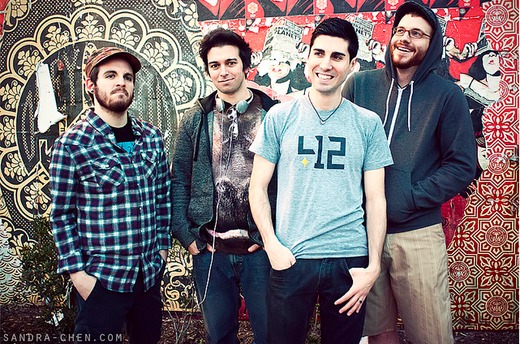 An up-­and-­coming pop-­punk band, Mace Ballard is built on top of a raw, old-­school punk rock spirit. The band polishes off a glossy production blending rhythmic guitar breakdowns, intricate leads, complementing harmonies, clever vocals, and hard-­hitting percussion into a delicate mix of pop-­punk with a distinct edge. Although MB has been forging the way as a DIY band since 2009, their new album is comparable to major recording artists like The Get up Kids, Wonder Years, New Found Glory, or Saves the Day.

Mace Ballard has found an addicting balance, mixing dashes of other genres into their pop-­ punk recipe, including post-­punk, hardcore, indie, emo, punk rock, and pop. Mace Ballard’s new album The Next Time You See Sky (released 11/12/11) has been gaining recognition among pop-­punk fans as one of the top DIY releases of 2011 and a band to watch in 2012.

From playing major hometown shows with bands like Anti-­Flag, I Am the Avalanche and more, to touring the east coast, Mace Ballard is putting in the miles to make neighboring states feel like a local show, and they’re no strangers to mobilizing a fan base as they’ve collected awards in the Pittsburgh areas. They hope the next time you hear Mace Ballard will just be the beginning..

Now it's your turn to introduce yourself to us: