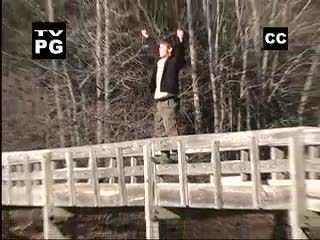 A spoof of Discovery Channel's "Man vs. Wild."

Urban Quest is an instructional video teaching how to survive one of America's wildest college towns: Athens, GA. Viewers will learn how to find food, water, shelter, and how to return to civilization.

This short film was made for Campus MovieFest 2008 at the University of Georgia. We were given a week to shoot, produce, and edit the film, which could not exceed five minutes.

No one is 'hating' this video, JackWalker, we're nearly surprised that this is was chosen as the 'best' video. Fuck it though, they deserve the $1000 for voting enough times to get their video to the number 1 spot. Hell they really deserve it if they can do it again in April. Keep those fingers working boys, just a few clicks left this month till you get another grand.
by paccomando on April 23, 2008 at 1:25 PM EDT

although, in my opinion, not the best cmf movie. you are what your ranking says you are. that is why there is an online "people" vote of the cmf competition aside from the judges vote

congrats on winning this month

people will always hate the films that are on top. i enjoyed it and was happy to be the first to comment so

OMG, seriously? Why would you bother ripping off such a shitty show to begin with? Secondly, how many of your loser friends did you have stay home and makeup accounts to push this offensively horrible video to number one? You should spend the $1000 sending apology letters to every video you "beat"
by shumac on February 29, 2008 at 12:21 AM EDT

I made better movies in highschool. Freshman year highschool. Although that is true, please don't get discouraged. As i see it, a bunch of us are really just rather upset that your film won the coveted prize over the rest...i think you should probably feel bad about that too, but again, don't get discouraged about your talents as a filmmaker. You could be great someday.
by charlesbusterwilliamson on February 29, 2008 at 12:16 AM EDT

well i must say congrats first of all...(?

second of all... IS THIS A JOKE? How did this get first place? Not to bash your film, but there are so many better (much better) films in the top ten

I hope you feel good about yourselves ripping off wayyyyy better talent. Good job. You guys officially suck way worse than i thought you did. Good job. Have fun with your not so well earned 1,000 dollars.
by purpleg22 on February 29, 2008 at 12:08 AM EDT
More Comments
kjkjava
?Need help?
Copyright © Amazing Media Group  2006-2021
p
A
n
E
F
Song Title by Artist Name
987654d
LM
iAnEAqqqq