« See all of Greg Lastrapes' Songs 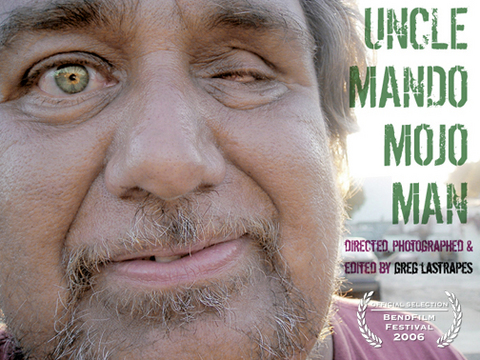 / 6:49
Uncle Mando has one day left before he has to leave his recently condemned home. Before he goes, The “Last Mojo Man in Garden Grove,” along with his friend Viejo, shares stories about his time there, and demonstrates the use of a backyard fire to drive away bad mojo.
Uploaded: September 13, 2007
Duration: 6m 49s

Somehow this video stood out to me from almost all the rest, you picked an interesting character to focus on. I disagree with Tom in that I don't think it was your intention for us to necessarily feel sympathetic for Mr. Mando, but just to show us his own lifestyle and opinions "as is" . The buildup at the end was a good touch too.
by chosetec on June 21, 2008 at 10:11 PM EDT

Very informative documentary. Although it sheds a lot of light on a particular person being a victim (of sorts), the premise of the short places the blame on society, yielding a documentary that already has establisted an opinion based on the evidence shown in the doc, but fails to translate the facts towards the unfortunate events leading to his demise, which would have also been interesting. With the doc making the viewer more fuzzy and warm and in the way of blaming America, I felt that there were too many mixed emotional moments where we either did or did not care, as an audience member. Cinematography was news man style, so there is really not a foundational opinion on the technical craft of the filmmaker in terms of shooting, as news style is not to be shown as a artistic way of communicating the information, it is just showing the information. The editing was ok, it felt too clunky in certain spots and the shifts back and forth from black and white to color, made me somewhat nausious and confused a little. The subject of the doc has been done way too much already as we have seen on the Travel Channel, Discovery, and National Geographic, as well as other local PBS-style 3rd world country or somewhat liberal docs, showing poverty as a form of society and victimization, when solutions are irrelevant and welfare and benefits to poverished victims and government programs are quite open and available to help people like this. All in all, average doc. Suprisingly ranked in the top 10. There is really nothing original about this doc, other than a new face, but we've seen this type of the environment on regular episodes of "Cops" and daytime news. It is really hard to find anything in this that makes if "stand out"
Great effort and nice job though..