« See all of Roly And The Rockers' Songs 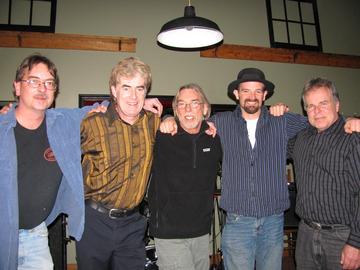 by Roly And The Rockers

This is a song written by Louie Prima, I actually caught his act along with Keely Smith in Vegas long ago, and covered by Brian Setzer.
Roly And The Rockers is my cover band. We do mostly early rock stuff. Steve Lee is singing lead on this track.
band members...from left
Avery Diebolt-drums/vocals
Steve Lee-lead vocals
Roly Greenway-bass/vocals
Aaron Ducan-sax/harmonica/vocals
Tim Palser-guitar/vocals

Comments for Jump Jive And Wail

Wow these guys are great, we should fly them to the Coast and pay them oodles of money

OK this is Steve Lee, the singer. I first clued into Louie and Keely years ago, their version of Black Magic has to be the kookiest, kitschyest ever. Louie was older, passed away in '78, Keeley was still singing when I was in Palm Springs 5 years ago, but my flight was already booked so I missed her. Louie was a contemporary of the Rat Pack, playing Vegas. Sam Butera was the brilliant hornman/arranger. Close to the main vein!
by steve macquarrie on April 29, 2009 at 10:03 AM EDT