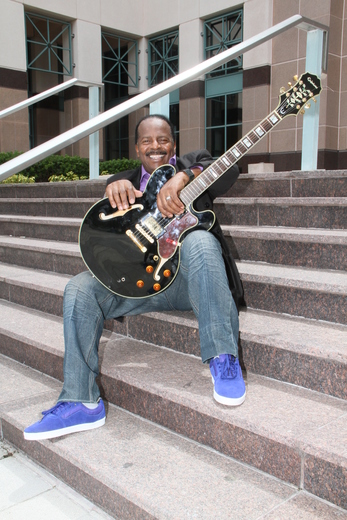 Arranger / Producer/ Composer If asked to describe the talents of this lead guitarist, composer, songwriter, arranger, and performer, “infinity” immediately comes to mind. There is no end to Mikael’s fusion of style, freely expressing his thoughts and emotions through his music. His first album, “In Ya Pocket,” presents a mature freestyle jazz sound, refined through a long and successful career. From his roots in Dayton, Ohio, to his successful outing as a member of the Commodores, Mikael’s solo album showcases the never-ending timeline of a unique blend of jazz, rhythm and blues, and a touch of reggae. From 1995 to 2005, Mikael was a force with the legendary Commodores, with whom his musicianship solidified the group’s high-energy life performances. Mikael’s ten-year relationship with the Commodores began when his quick-rising talents and accomplishments had reached Walter “Clyde” Orange of the Commodores. Clyde called upon Mikael’s songwriting talents to write songs for the Commodores. Once Clyde realized the full extent of Mikael’s talents, Mikael was invited to join the Commodores as their lead guitarist. As a member of the Commodores, Mikael shared the live stage with the likes of  Glenn Lewis, Gladys Knight, Isaac Hayes, and the list goes on. He appeared on the Lou Rawls Telethon with Stevie Wonder, Ashford & Simpson, and Brian McKnight. On the international stage (including a tour of Japan), Mikael shared the stage with Boyz II Men, Diana Ross, and the Temptations. Prior to joining the Commodores,Mikael then added reggae to his musical pantheon. Some of Mikael’s reggae tunes  received airplay in Jamaica from top Jamaican radio announcer, Barry G. In the mid-1980’s, Mikael’s single, “It Must Be Nice,” made it to the top 20 in the Miami market and was featured on the hit television show, “Lifestyles of the Rich and Famous.” Mikael’s musical roots began in Dayton, Ohio, where he began his formal musical training at Sinclair Community College. He continued to refine his education at Howard University in Washington, D.C. Always in good company, Mikael studied and collaborated with Walter “Junie” Morrison, original keyboardist and lead vocalist for the Ohio Players. Having paid his dues as an artist, composer, songwriters, arranger, and performer, Mikael’s time has come to step into the spotlight. This is Mikael, a new musical force to be recognized.