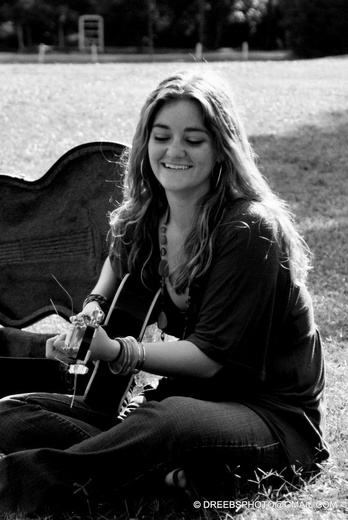 Born and raised in Brandon, Mississippi, Natalie has received formal instruction in piano and guitar throughout her high school years. As music became her true passion, she began composing, and very early on strived to find her own unique sound and voice. Natalie pursued her passion for music by continuing her education at the University of Southern Mississippi’s Entertainment Industry Program, graduating in May, 2008. While at USM, she continued to actively compose, perform and record, collaborating with a number of local artists and producers, further developing and shaping her own musical character - a mix of soulful blues, rock and roll, and a bit of folk. As a musical ambassador of the USM’s Entertainment Industry Program she performed not only locally but traveled internationally, as well, performing in Paris, France and London, England as the Program’s featured artist. Steadily increasing her musical prowess, repertoire and her fan base, Natalie’s artistic efforts and creativity were rewarded by a recording contract with South City Records, in the spring of 2008. She calls Hattiesburg, Mississippi her home, and performs regularly throughout the region. In addition to her regular local appearances, Natalie has performed for the Mississippi Blues Trail program with Bobby Rush, Mockingbird Round at Schimmel’s, grand opening ceremonies of the Jackson Convention Complex, Hattiesburg’s Art Walk/Hub Fest, performed along side Cedric Burnside and was the supporting act for Kool and the Gang. Natalie Kirk & Co will be performed at the 10th & 11th Annual Rhythm & Roots Reunion Music Festival in Bristol, TN in September 2010 & 2011.

“Honest, heartfelt lyrics that usually come from a more aged soul. There is wisdom in Natalie's music that belies her youth and leaves you questioning if she's been down a longer road than her years alone might explain. She speaks of the human condition in relatable terms and is a believable storyteller whose musical integrity is self-evident.” -Jeff Rassier, Owner, Sound Reasons Recordings; General Manager WUSM-FM 88.5

“Natalie Kirk & Co. reminds us about everything we like about the South. Natalie's lyrics are deliberate and honest, and together with her band, she delivers them with a fire we haven't heard since Janis Joplin.” -Blake Mogabgab, Singer/Songwriter, RiverLeft

“Natalie Kirk & Co. have one of the most pure sounds that you’ll find out in today’s music world.” -Stephen St. James, Operations Manager/Program Director, Rock104 FM

"Folk singing and songwriting at its best ... Makes me wanna take off my shoes and sit on the front porch for a while."-Don King, Program Director: WNSL, Middays on WUSW/Afternoons on WNSL, SL 100/ 103.7 FOX

“She has a really nice sound”-Danny Weissfeld, Musician/Songwriter, toured with Kelly Clarkson as a lead guitarist.

Q & A with Natalie Kirk

Q. Talk about your music..Who do you sound like, and who does your music remind people of?

Music is Everything. My music is the only way I can really express my true self and the way I feel about things. People tell me I sound like Janis Joplin, Bonnie Raitt, Norah Jones...I think my music reminds people of Carole King a little bit as well.

Q. Talk about what you're good at.. What makes Natalie Kirk & Co. special and different from others? I believe God gave me a gift and originality is a major part of that gift. I think I'm good at taking a song and making it my own...Natalie Kirk & Co. is special and different because we play songs that no one really plays anymore, so when people come to see us, it's not just the same old covers we've all heard before the same exact way. We bring a special energy to our show that I love. I put everything into my singing and playing while I'm on stage, and I think our fans really connect with the emotion. Also, we mix our covers with my originals, so yea

. Q. Who inspires you? be specific (musicians and/or people you know) My mentor/ex-professor, Darko Velichkovski, is a huge inspiration for me. He went through so many hardships growing up and ended up leading this amazing life. When he speaks, I listen. Also, my drummer, Jon Barr, is an inspiration because he is so dedicated to his music and technique. I have never seen someone work at perfecting his/her skill like Jon. He makes me want to play more and work harder at what I do because at the end of the day, music is our lives. Many other people inspire me from my parents to other friends of mine.

Q. When did you realize you wanted to do music? My mother said it was when i was 4, but I think it was around the year 2000, after I had been writing songs for a year or so. I think I've always kind of known that God made me for a special reason, like He makes everyone, and that reason was music. Also I used to watch CMT religiously. I used to watch Reba and Trisha Yearwood and Martina Mcbride belt out their songs, and I would literally start crying because it moved me so much. Sometimes you just feel things and you know.

Q. How was the band assembled? How long have you all known each other? How did you meet, when did you form your band? What inspired you to make music together?

Ah the Band...and its history. I formed my first band at the end of 2007, but the band I have now is totally different and has a very unique story surrounding it. There is too much to tell in one question though. My drummer and I are the longest running members; we have been together over a year now. The current band consists of Jon Barr on drums, John Mark Odom on lead guitar, and Kyle Baughman on the bass. These three guys were the band for my ex-boyfriend, my ex-guitar player, before it disassembled. We all met through my ex because all the boys went to school together and were buddies growing up. After knowing each other for about a year, it just seemed like a natural fit to grab Kyle and John Mark and let the boys jam together again.

Q. Do you have a record label? Are you a member of any music organizations?

I am signed with South City Records here in Hattiesburg, and I am a member of the PRO ASCAP.

Q. Who writes your songs? What are the main themes or topics for most of your songs? Do you think these topics will change over time?

I write my songs. The main themes right now are about love, the idea of it, the loss of it, etc. I believe writing topics will always change depending on what I'm going through at the time. Also I believe with experience and maturity comes better and different topics. Love is always my favorite though.

Q. What’s your ultimate direction for your band? Are you seeking fame and fortune?

The ultimate for me would be to be able to make music and play live shows, as long as I can pay the bills. Fame and fortune are merely fake and material. I want people to be able to connect with my music and thrive on it, like I have done with so many artists. If money does come in abundance, I will share it with my family and friends and people around the world that actually need it.

Q. How has your music evolved over time?

Well, I'm still a young musician, but I can already see growth and changes in my music. The things I'm writing about now and the way I write about those topics shows.

Q. How can fans-to-be gain access to your music? Do you have a website with sample songs or a demo CD?

You can go to myspace.com/nataliekirkproject for info and streaming. My album can be found on i-tunes, amazon, cd baby, and e-music. The album is also in daily regular rotation on local Hattiesburg, MS radio station WUSM 88.5

Q. Is there anyone you’d like to acknowledge for offering financial, promotional, emotional support?

My parents!!! They are my financial support, and thank God for them. Thanks to South City Records for letting me make the album and for putting it on the map. And my roommate, friend, and manager, Gabby Gara for promotional and emotional support. She is always 5 steps ahead of me and the band. She has given us so many outlets to put our music and our faces where people can see us. She is also there for me no matter what, especially when I'm being dramatic and my life seems to be ending because of some ridiculous reason. Also all of our other friends and supporters that have been there from the beginning when I wouldn't play for anyone. Thank you all...I love love love you guys!

Thanks be to God....I can't wait to see how it turns out.