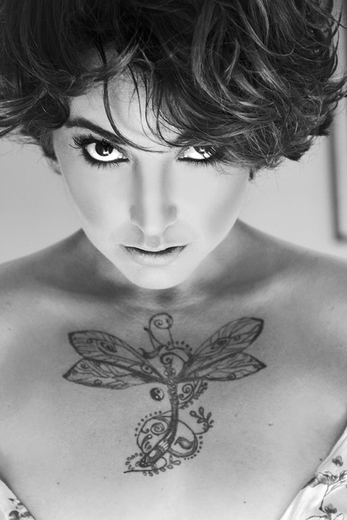 
Nellie Bell is an extraordinary new artist, a singer, songwriter, musician and producer with a powerful voice and an array of exquisitely wrought personal songs with huge crossover appeal. Her potential is vast and the range of her material is spellbinding, with the fluidity of jazz, the immediacy of pop and the pure emotion of soul. Just think of her as the female Bruno Mars or Alicia Keys, Imogen Heap and Nora Jones in one body.

She doesn’t just have some incredible songs. She also has an incredible story. It is the story of a young woman who has reached giddy heights and plummeted so low she was forced to make fundamental changes to her personality, even her identity.

She was born Natalie Gauci and grew up in a house in Melbourne, Australia, with her Maltese father, a hairdresser, Italian mother, who used to sing professionally, her younger brother and sister and grandparents. Her grandmother would expose her to classic Italian crooners such as Dean Martin while her mother introduced her to the pop music of the day, from Whitney and Madonna to Bananarama.

It was inevitable from an early age that she would be a star. In fact, she was something of a star from an early age after she appeared in several television commercials - for Barbie dolls and Coles supermarkets - as well as the film Brilliant Lies. She also acted in science fiction TV series Ocean Girl and hosted her own computer show on cable TV.

“Instead of going out with friends on a Friday night I’d do a TV show,” she laughs. “I got to know what it was like to work from a young age.”

Music was always important to her. A “massive Michael Jackson fan”, at school she would entertain pupils with MJ dance routines. At 16, she discovered the vinyl collection of her best friend’s dad, a trumpeter, and he would let her borrow records by Miles Davis, BB King, Sarah Vaughan, Diana Krall, Nina Simone, Charlie Parker, Sonny Rollins, Chet Baker - all the jazz, soul and blues greats.

Aged 16, she won a scholarship to study music at the Victorian College of the Arts, “one of the hardest yet most challenging and rewarding two years of my life”. Then she formed a band, ESP, later known as the Natalie Gauci Band, with herself on lead vocals and keyboards.

“We played mostly jazz standards and soul classics by Aretha, Chaka Khan or Otis Redding, but it was the best thing that ever happened to me,” she says. “I realised I could get paid for doing what I wanted to do.”

She got booked for residencies and Nellie, then still Natalie, handled not just the singing and the song choices but the organisation of the group. There were several permutations over the next few years - from jazz trio to funk outfit - according to demand, which didn’t faze her, with her innate eclecticism.

Throughout this time, she was writing her own songs - jazzy, soulful ballads, occasionally guitar-based and rocky, with dark lyrics penned in the shadow of her parents’ divorce. She used songwriting as a form of therapy.

Meanwhile, she was working as a session singer, getting booked for everything from gigs all over Australia to jingles, and as a vocals teacher.

And then, in 2007, she auditioned for the fifth series of Australian Idol.

The judges were immediately impressed. “I think you can win this competition,” said one. She didn’t make the top 12 but she was picked as a “wildcard” and eventually made the final, although the process was not without its trials when she felt the effect of the judges’ harsh critiques.

“Six weeks before the final, I broke,” she admits. “I was working so hard to please people.”

It was her realisation that you can’t satisfy everyone that made her determined to please herself.

“I thought, ‘I’m not going to care anymore what anyone thinks about my songs, my arrangements, or my singing. I’m going to be completely me,’” she says. “It was like getting an extra power. From then on, any criticism that I got just washed over me. And I had so much fun.”

She sang songs by The Divinyls and Kate Bush, even performing one week standing on a piano. She won over judges and audience, and she came first.

She felt elated, but a little concerned at the prospect of relinquishing control of her career to a large organisation - Sony had already signed her to a deal and wanted her to record an album of the songs that she had sung on the show.

“My mum said just before the finale, ‘Are you sure you want to win?’ I said, ’It’s a bit late now!’ She said, ‘You know what’s going to happen now? You’re going to have to do what they tell you.’ She knew that that wasn’t going to work for me.”

Still, it worked commercially. The first single, Here I Am, reached No 2 and went gold. And the album The Winner’s Journey - featuring her songs from the show, re-recorded with an orchestra - sold well as Natalie undertook a successful tour of Australia, the first Australian Idol winner to do so.

And yet she was feeling exhausted, lost, and unfulfilled, unable as she was to sing the self-penned songs she had been amassing over the years.

“I was part of a machine that didn't really expose anything creatively about me,” she says.

"I felt because everyone wanted me to be a certain genre, I was stubborn that I didn't want to be labelled or merged into one style and one sound. I felt because I am a talented writer and producer as well as a singer, I wanted to find my own pedestal to stand on, rather than wait all that time after my deal was done, to do what I do"
"The past is the past, and the choices I made were right for me at that time".

She totally changed her image and formed an electro-pop duo called Tune In Tokyo with producer Paul Brandoli while simultaneously pumping iron and becoming a fitness trainer.

“It was about finding my own identity,” she says of this period. “Even my family didn't recognise me!”

Both Tune In Tokyo singles - Dreamer (which got picked up by Soraya Arnelas, the winner of a Spanish talent show, and became such a big hit in Europe that Natalie “didn’t have to work for two years!”) and Ray of Love - charted high, even though, with her new look, nobody recognised Natalie on the street, an anonymity she enjoyed after the fuss and fame of Australian Idol.

During 2011-13, she moved around a lot. She lived in Germany where she performed in clubs and worked with an underground dance label. She featured on a single by a pair of Italian DJ-producers, and recorded a Kylie-ish single in Sweden. There was a jazz album called Ha Ha Ha and an alternative electronic EP, Elektrik Field, although neither saw an official release. These were all intriguing steps on the journey to becoming Nellie Bell.

Relocating to London where she had come to teach music at a school in Harrow, she was far from home but still, because of social media, there was not quite as much distance as she would have liked from her previous existence as Natalie Gauci the Australian Idol winner. With family and friends still posting up links on Facebook of her appearances on the show, and feeling anxious in her new home of Hackney, she had a panic attack, and a breakdown.

“I felt like a product, not a person,” she reveals. “Everyone wanted me to be that person and I wasn't that anymore. That was a lifetime ago. A past life.”

So she decided to cut off everyone from that past life and change her name by deed poll to Nellie Bell.

“It was a tough decision,” she confesses, adding that explaining her transformation to her family was as difficult as coming out as gay. “But it’s something I had to do. I look at things now with completely fresh eyes, like a baby. Everything’s awesome. Now I’m prepared to speak my truth all the time.”

And she is doing it via her music.

“The making of this album means a lot to me,” she says. “Every song on it explains the journey I’ve been on.”

The album opens with You Are Real because it captures the sense of someone waking up to a new reality.

“I thought I’d written it about someone else but the more I sang it I realised it was about me,” she says, misty-eyed. “It’s about waking up to yourself and recognising that you can make it.”

It is an album that charts Natalie’s metamorphosis into Nellie, her emotional and spiritual growth. These are songs about acceptance and renewal, stark realisations and rebirth, escaping darkness and dreams of a better life, the power of the imagination and the pursuit of happiness.

Throughout, there is a contrast between lyrical depth and a tuneful lightness, an irresistible combination that allows the songs’ meanings to permeate slowly but surely as the melodies take hold.

What also grips you as you listen is the idea of Nellie Bell, the artist in total control of her music. That control extends beyond her songs. She is both performer and CEO of her own organisation, one that includes a team stylists, photographers and videographers: just call it the Haus of Nellie.

“It’s about building relationships,” she says. “I’ve created a small hub of people who are passionate about the music, who I can take with me.”

Having been a teacher for so long, she has ambitions to nurture young talent as the head of a label. For now, the focus is on the album. It is a very special piece of work, one destined to mean an awful lot, to an awful lot of people, in 2015. As much as it means to Nellie.

“I feel like it’s a way of life,” she decides of the album, which is the story of Nellie Bell. “It’s like an awakening, really. It’s been such a life-changing experience, one that has allowed me to spread my wings. It’s huge for me.”

And it will be for you, in this, the year of Nellie Bell.