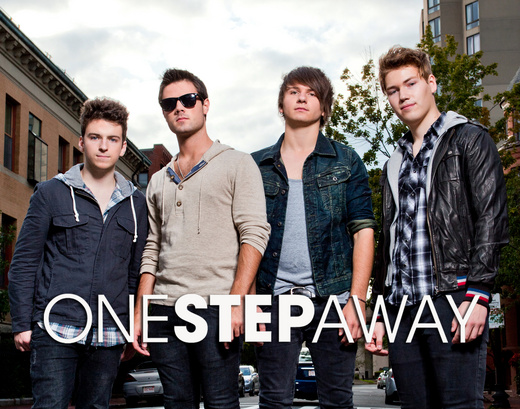 About One Step Away

One Step Away's new full-length studio album "For the Broken" is catching national attention, now playing on over one hundred radio stations across the United States.   One Step Away puts a new twist on Pop|Rock.  Blending high energy performances with the vocal talents comparable to the best of American Idol, One Step Away appeal is far-reaching.   One Step Away made their national TV debut on the MDA Telethon as winners of the 2011 Clear Channel and iHeartRadio Get Discovered! Contest.

One Step Away started out competing in local battles of the bands, which they won habitually with their sunny, melodic rock. They won the Boston Music Festival in 2008 and Berklee College Scholarships. With passionate professionalism and studio-precision sound, One Step Away performances have a mesmerizing appeal as they mind-meld with their audiences.  They have ventured across the country sharing their ear-candy Rock music on stages far away from their East Coast home as far as  Universal Studios Hollywood and Whiskey A Go-Go in Los Angeles and the South Point Hotel & Casino in Las Vegas

One Step Away band members are also consummate song-writers.  Their recently released eleven song album, "For the Broken", is jam-packed with heart-touching originals.  For the Broken has garnered them escalated national attention and awards, including a coveted spot in Alternative Press as an Unsigned Band of the Month, an Independent Music Award nomination in Pop|Rock and dozens of Featured Artist Spotlights, all categorizing One Step Away as the next major “Break Out Artist”.