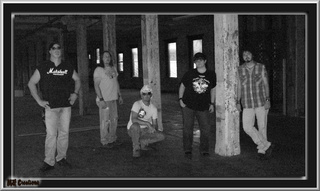 7 Day Ride began as a jam session among friends and grew into the musical sensation it is today. Each member of 7 Day Ride have their own unique perspective toward music, which allows the group to appeal to people of all ages and walks of life. Marie Henderson, Eric Henderson, Danny Beason, Neal Hawkins, and Jamie Lassetter are 7 Day Ride, but they are more than the typical band, with each member adding their own style to the music, giving the band a rich sound, with a kicking Southern flavor.

Marie Henderson, wife and mother of 4 girls, was born and raised in Geraldine, AL. Born into a family of musicians, her love of music began at an early age. She began singing in church at the age of 5. An award-winning songwriter and a self-taught guitarist, she got her first guitar at age 13 and at the age of 14 wrote her first song. She performed in various Talent Shows and events throughout high school, marched the alto saxophone in the Geraldine High School Marching Band, and performed with the FFA string band. Her roots began in Gospel music, but grew to include a wide variety of artists and genres. Just a few of her favorite artists include: Bon Jovi, Aerosmith, Daughtry, Whiskey Falls, Shinedown, Stevie Wonder, Little Big Town, Martina Mc Bride, Faith Hill, Steven Curtis Chapman, and Clay Crosse. At the age of 18, she married fellow bandmate, Eric Henderson, and put her music career on hold to start a family. After the birth of her fourth daughter in early 2003, she slowly began pursuing her music again, winning several awards, including Female Entertainer of the Year and Most Promising Female Vocalist of the Year, 2004. She has continued to perform since that time, joining her fellow bandmates of 7 Day Ride in early 2007.

Drummer, Eric Henderson, was born and raised in Geraldine, AL. Also born into a musically enriched family, he began singing in church at the age of 6. Inspired by a local drummer, Eric received his first drum set and began playing at the age of 10. He began marching with the Geraldine High School Marching Band, and became the youngest Drumline Section Leader in Geraldine's history. Becoming an award-winning drummer and percussionist, Eric began instructing other young drummers, while juggling his studies, a part-time job, and his love of music. He played in various garage bands throughout high school, performing in a barrage of competions, contests, and other events. In May of 1994, Eric graduated high school, and continued to perform with different bands, even after his marriage to high school sweetheart and fellow bandmate Marie, in December of 1995. Even after the birth of his 4 daughters, he continued to play and perform. Eric's natural ability and versatility, has allowed him to play a wide range of of styles and genres, including: Rock, Southern Rock,Country, Gospel, Praise and Worship, Blues, and Jazz. Eric continues to teach, and to perform, becoming a founding member of 7 Day Ride in the fall of 2006.

Guitarist, Danny Beason, was born in Detroit and moved to AL at the age of 7. His interest in music began after hearing Kiss, and at the age of 13, he began playing the guitar. His influences included, not only Kiss, but Aerosmith, Led Zepplin, Lynryd Skynryd, Eric Clapton, and Jimmy Hendrix. In high school, he met Damon Johnson, who later became known for his stints with Brother Cane, Whiskey Falls, Ted Nugent, John Waite, and Alice Cooper. They put a band together, and he played his first club at the age of 18. They continued to play a wide variety of venues, including clubs, dances, proms, and outdoor events. He continued playing music, after parting ways with Damon, and like many musicians, he experienced the many ups and downs of being a performer. At the age of 30, he put aside his music to begin his journey into parenthood. After seven years of not playing at all, h is love for music prompted him to pick up his guitar and step back into the music scene. He began jamming with various bands and artists, and finally came to be a founding member of Seven Day Ride in the fall of 2006.

Bassist, Jamie Lassetter, was born and raised in Geraldine, AL, much like the Henderson couple. Brought up in a family of talented musicians, it was only natural when he picked up a guitar and began playing at the age of 13. He played in various garage bands, that often included fellow bandmates, Eric and Marie. He also regularly participated in the Geraldine High School Marching Band's sideline activites. Although the guitar and the bass guitar are his main instruments, Jamie is also a talented songwriter. His drive and determination to succeed, have made it possible for him to continue to pursue a career in music. Being such a versatile musician, he has also played a wide variety of styles and genres, including: Southern Rock, Rock, Country, Gospel, Jazz, Blues, and BlueGrass. Jamie is very philosophical about music, saying, " Music is a way to the soul. If you can't feel music, then you can't feel anything."

Guitarist, Neal Hawkins, was born in East Texas, and knew at an early age that music was the path he wanted to travel. Hearing Stevie Ray Vaughn and ZZ Top, these artists' bluesy, but rock-flavored styles flipped a switch in Neal, and sent him well on his way to knowing what he wanted most of of life and his music. Later making his home in Geraldine, AL, he received inspiration, as many other would-be musicians have, from a local musician, Damon Johnson. Not only talented guitarist, he is also an accomplished songwriter, with numerous songs to his credit. So, continuing to follow the path chosen for him, Neal performed in many different bands, until trial and error almost did him in. But he never gave up, and like a gift from God, a new group formed at his backdoor, letting him know that there is a reason for everything, and that reason is 7 Day Ride.