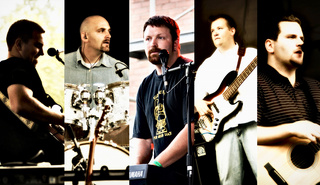 It’s clear this Amherstburg quintet isn’t afraid of the big M word – mainstream. The music they make would sit comfortably on the playlist of any commercial rock radio station. As such, the presentation on this CD is as professional as it comes: Polished to a gleam, produced to perfection, with no rough edges. Just strummy acoustic guitar-driven tunes along the lines of Counting Crows and the Goo Goo Dolls. In terms of what they do, these guys have it cold. There’s a palatable clarity to the voices of lead singers Kevin Jarvis and Will Hawksworth, and special credit should go to the keyboardist Chuck Arsenault and bassist Todd Kidd, who add texture and depth to each track. This album won’t win the hearts of the vanguard, but the masses might be a different story

Finding members who share a musical vision is always difficult when forming a band, especially in a border town known more for its Pontiacs than its percussionists. Fortunately, Hawksworth says he and Jarvis already had a mutual friend in mind. "Our drummer, Ken Money$$, has been a very close friend of ours forever", he explains

"We met Chuck at a park, says Hawksworth. He was walking around with a case for his trumpet, so Kevin asked him if he was a musician. It turned out that Chuck is a multi-instrumentalist, so we ended up jamming. And our bass player, Todd Kidd, is a close friend of Chucks, so he invited him to come aboard.