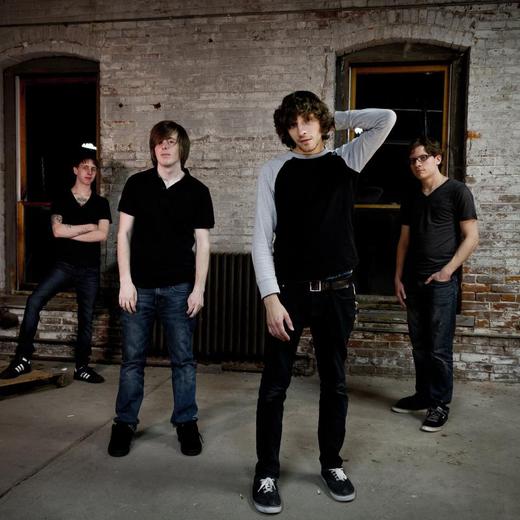 Hailing from the streets of Philadelphia, PA, the four young guys in Adalie have accomplished a lot since starting the band in 2007. Since being founded by Derrek Siemieniuk (vocals/guitar), John Young (bass), and drummer, Matt Siemieniuk, the band has evolved their sound significantly. The progress became more evident when they inquired local friend and musician, Dan Kirk to join and share vocal and guitar duties to balance out their lineup. In 2009, following John's departure, Dan's brother D.J. stepped in to take his place as Adalie's permanent bass player.

They have gone on to play festivals such as the Van’s Warped Tour, Rockstar’s Taste of Chaos Tour, as well as opening for many national acts. In addition, they have also toured surrounding cities and states and have played countless local shows.

Drawing a wide range of influences such as Taking Back Sunday, Thursday, Coheed and Cambria, Underoath, Glassjaw, as well as others, the band sets to create something catchy and familiar all the while capturing something new and refreshing.

In July of 2009, the band released their debut EP titled Awake. Awake consists of five tracks full of catchy, aggressive, melodic tunes. This EP is just the beginning, for the band will be playing a lot more shows, including touring, in support of their release. On a final note, they have already begun writing and demoing new music for future efforts. Adalie's energy is growing strong and their momentum will garner them unstoppable.

"Love or detest it, there’s a pretty happenin’ emo/screamo/pop-punk scene in Philly that only continues to grow, and local four-piece Adalie has vaulted near the top of that heap of bands just two years after forming. Taking its cues from Taking Back Sunday, Jimmy Eat World and Glassjaw, among others, Adalie brings high-pitched vocals, the occasional raw-throated yowl, buzzsaw guitars, a healthy dose of sweet melodies and catchy choruses ... a sound and vision that seems to charm the kids (and editors of Alternative Press magazine). It has already gotten them on tours like Warped and Taste of Chaos, and could make them one of Philly’s breakout acts of 2010." - Philadelphia Weekly

"Having two lead vocalists isn't exactly revolutionary, but Philadelphia rockers Adalie have been doing it a little differently since their current lineup came together during the summer of 2008. 'We fuse together darkness in the vein of Glassjaw with super-melodic clarity,' says vocalist/guitarist Derrek Siemieniuk. They're seemingly perennial performers when Warped Tour and Taste of Chaos come through town; they've also opened for Alesana, Emarosa and After Midnight Project.

Adalie released their debut EP, Awake, this past July, showcasing their genre-busting blend of everything from Thursday and Coheed And Cambria to, well, Hilary Duff (they do a sweet cover of 'Come Clean'). 'Our music is inclusive to many different kinds of listeners,' says Siemieniuk. 'We provide something for everyone.'" - Alternative Press

"I admit it, I first read about this band in Alternative Press ... and the magazine cited HEAD AUTOMATICA as a comparison. That at least warranted a checking out of the ol’ MySpace page, and it was a good idea, since these young Philly fellas have a solid music plan of very melodic emo/post-hardcore ... the songs from the band’s debut EP, Awake, stay with you hard after just a few listens." - Paste Punk