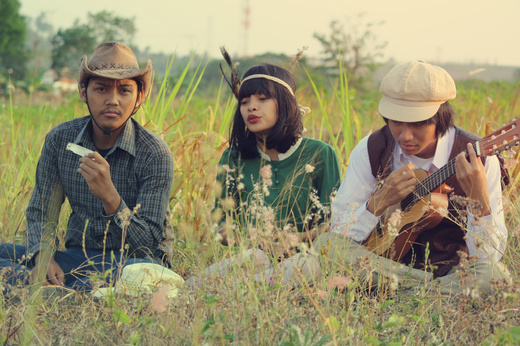 Afternoon Talk is a band with simple-sweet-short-acoustic songs. In the begining 2011 Sofia and Osa invited Ridwan (osa's bandmate during high school) to start recording their work and became a project called "Afternoon Talk".
Afternoon talk offers the public an acoustic sound with wide dimensions where the corridors are “elastic” with different variations of augmentations of simple music. Without leaving the concept of simplicity in their music, Afternoon Talk try to plunge and incorporate their own way of playing

With a variety of influences, Afternoon Talk always try to mingle with the progression of music and the main idea of their work, so it does not get boring. The song “There's one thing you should know” tells the feeling of longing and be together with the one we love

In presenting their work, Afternoon Talk often incorporate traditional Indonesian culture. Local culture is regarded as treasure; it is an essential thing that cannot be separated from their identity.

Afternoon Talk offers a concept of exploration and identity. However, whatever is stuck in your head and your ears,Afternoon Talk have managed to make an intelligent appreciation for music that is smart with aesthetic value