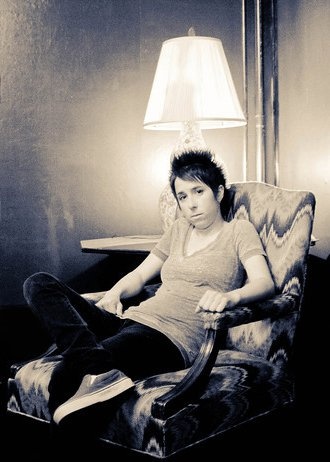 Despite nature, sometimes a plant will shoot up in an unexpected place—atop a building or in the cracks of a broken sidewalk. That’s how Louisville, Kentucky, singer/songwriter Amanda Lucas came into music; without prior family influence or interest in the field, Lucas’ music career sprouted from uncultivated talent.

Lucas began singing at the age of 2, and as her family would say, she sang before she learned to talk, using any household item she could find as a microphone—including items from under the bathroom sink.

At the age of 13, Lucas attended her first concert. After seeing country singer Deana Carter perform, she purchased a guitar for 50 dollars and taught herself to play; mostly by ear, with the help of a friend, and some cheap music books. A few years later, after playing for her “Discovering the Arts” class, she performed, upon request, at the high school’s winter semi-formal.

“I was extremely nervous the first time I performed in front of my peers. I never thought I would actually sing or perform in front of people,” Lucas said. “Although it’s gotten easier, I still get nervous at times, but that’s a good thing. I’ve heard if you don’t get nervous, you don’t care anymore.”

Caring is what pushed Lucas onto the music scene in Kentucky. Having performed a few talent showcases while at Lindsey Wilson College, Lucas also managed the rock band Altered out of London, KY. When the band broke up in 2007 with a summer’s worth of shows booked, Lucas stepped in, performing a handful of originals and cover songs. “It was never a question of cancelling, but a question of who was going to replace them,” Lucas says.

As her audience base grew, so did requests for a CD. In January of 2007, Lucas recorded a demo in a studio located in a barn in Albany, Kentucky. She sold copies at her shows for a couple of bucks and the overwhelming response led her to later record a full-length album. In September of 2008, Lucas’ song “Kiss” placed second in a singer/songwriter competition on www.ourstage.com. In 2009, she finished in the top four on the www.alternativeaddiction.com website in their “Next Big Thing Competition.” Her song “Walkaway” was chosen as the official music of “Talk Radio Portal” and can be heard during the opening and closing of every show.

With a strong sense of humor and humility, honesty rings throughout Lucas’ work. Her 2008 debut solo album, “Half Empty,” which plays on the personalized internet radio service, Pandora and on public radio stations across the nation, provides real-life lyrics with hooks and catchy melodies. Writing what she knows, her songs are like an audio journal of her life and cut through to the truest meanings of life, love and human interaction, which resonate with her listeners

In September 2011, Amanda Lucas and Audrey Cecil took the next step in their musical journey by giving themselves the collective name, “Bridge 19.” They will release their first duo record in spring 2012.