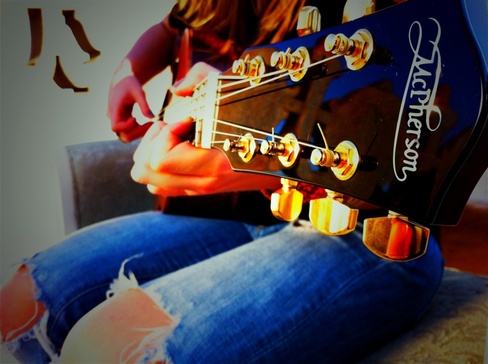 Anna Johnson is a singer/songwriter who started a musical journey in September 2008 when she began to study songwriting at McNally Smith College of Music in St. Paul, MN. After a magical year of learning and growing with a full scholarship awarded by the legendary rock band Queen, Anna was presented an opportunity to record an album in Nashville, TN. She was hesitant since she had finally found a school she loved and was blessed with the scholarship she couldn't imagine giving up, but still she followed her heart and made the move. She packed her things in her little car and drove to a town she'd never been, to live in a home she had never seen, with a landlord she "met" via cragslist. It's true. Crazy and true.

Between September 2009 when she moved to April 2010, Anna recorded and produced her debut album, "Ready To Go", with the help of producer Billy Smiley and engineer Bill Whittington. The two of them became like uncles to her and she was SO blessed to have fallen into their hands. The album turned out exactly as she hoped since she was able to be so involved every step of the way.

With the album release in May 2010, Anna found a fabulous band of guys to play a big show in her hometown of Chippewa Falls, WI. It was a blast.

Since then Anna has been writing and recording new music, getting a handle on her online presence and making friends and fans as often as she can. She has found an official Nashville band including her sister, Julia Johnson, and a bunch of great guys:

Julia is an essssssential part of the band as she moved to TN during the recording process and was able to add her harmonies to the record itself. She's been by Anna's side through it all: from writing the songs on the bedroom floor to trudging into late-night shows when the two of them were too exhausted to stand. The sister charm is irresistible, and their vocal blend couldn't be recreated by anyone else. Ever.

One of the most EXCITING things the Anna Johnson Band has done since becoming a band is record and release Anna's second professional independently-recorded and released album, "Winding Road". The album was recorded at McPherson Studios in Nashville, TN through the course of 2011 and released in March 2012. The album features songs like "We Were Wrong", "Getting Over You", "Home", "Road" and more! The album is a snapshot of Anna's life through the crazy journey that followed the release of her first major album and the adjustments of her life in Music City. The album is for sale at annajohnsonmusic.com <---- Her official website which was launched in early Spring 2012!

At this point in her career, Anna is seeking management and booking as many performances as she can: festivals, fairs, private events, cafes and clubs, churches, and even graduation parties if you reeeeeally want her :).

- Follow the journey on Twitter @themusicann
- Befriend her here on faceboo
- Share with all your friends (spreading the word is the best help you can offer
- And listen to her music at reverbnation.com/annajohnson OR myspace.com/annajohnsonmusic

OH! And "Ready To Go" can be mailed to you FREE shipping within the continental US OR you can find it at any performances and on iTunes.

On behalf of Anna and the band, thank you for your support and encouragement, and do help all of them by spreading the word!