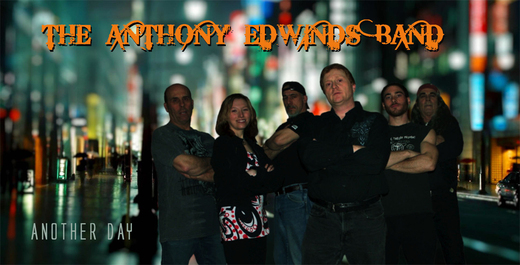 Anthony Edwinds - Singer, Songwriter, Musician, Producer and Audio Engineer
Anthony taught him self how to play guitar at the age of 7
It wasn't long before he started singing and writing his own songs.
Anthony Edwinds formed a few great rock bands through the years, Destroyer, Catch 22, Sudden Impact to name a few.
Winning the Battle of the Bands 5 yrs in a row and an appearance on the
Jerry Lewis Telethon TV & Radio shows put him on the map.
Some of his classic rock original songs could be heard on the Best of Boston Bands. (Bay State Rock).
After playing for over 12 years he decided to take a small hiatus from performing for family.
Never putting down his love for writing music and recording he wrote over 120 songs during this time.
In 2007, he hooked up with singer and songwriter Lone Wolf James.
Anthony helped produce and carve out some of the great classic rock sound for some of the LWJ originals
while opening shows for nationals such as the Southern Rock All Stars, Molly Hatchet, Eddie Money,
James Montgomery, Larry Hoppen, Orleans,Jefferson Starship and the list goes on.
In 2008, Anthony Edwinds was invited to be one of the New England's Judges for the Guitar Centers
BB King's, King of the Blues Contest to help hand pick the winner.
While spending a lot of hours in his private studio working on new stuff,
Anthony decided it was time to record his own CD
Being the great audio engineer and producer he started laying down tracks in his studio for
his upcoming Debut CD,.
While doing this he was also laying down tracks for Motley Crue Drummer Tommy Lee's
Upcoming CD Contest.
Anthony recorded on two songs for Tommy Lee with both songs placing in the contest,
one placing first and the other placing third.
Leaving the band Lone Wolf James to devote all his time on his Debut CD,(To be released in 2010).
He continues to work hard on his Debut CD and plans to release his new music with videos as well
Re- grouping for some new shows in the near future.