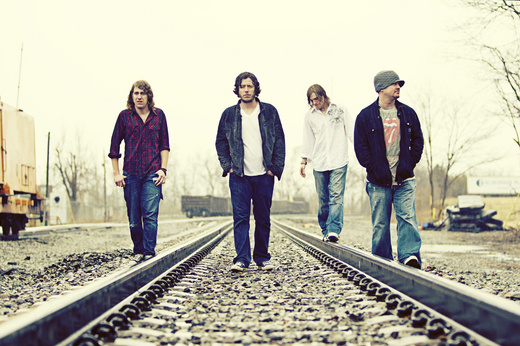 All it took was boredom, one practice, and a first gig at a popular college bar to transform four friends that just wanted to play music, into a band that is now being buzzed as “the next big thing.” They take it all in stride though, playing each show with the same passion and enthusiasm whether it’s a local haunt or in front of thousands like when they opened for One Republic and Fabolous on the Crocs Next Step Campus Tour 08’.

Atomic Solace has created a niche in the Central Kentucky music scene. Originally formed under the name Solace in 2006, the band is known for its progressive, aggressive pop meets rock. The sound of Atomic Solace is a veritable celebratory tribute to both the contemporary and traditional influences of Coldplay, Sublime, Springsteen, and The Beatles. Their distinctive sound has allowed them to entertain alongside a diverse range of bands from Your Vegas and Forever the Sickest Kids to Damien Horne and the aforementioned One Republic and Fabolous. Each of the four band members is essential for Atomic Solace’s testosterone-fueled meets “pop with a conscience” sound. Joe’s raw, anguished vocals emits a raucous vitality met with a bluesy undercurrent, Kyle pounds out uncorked, defiant bass lines, Brandon’s straightforward guitar work produces melodic lead riffs, and Ben delivers a solid backbeat with sublime power.

While performing throughout Central Kentucky, their ever enlarging fan base demanded an album. The four took their unique sound and hit the studio in late 2007 after hooking up with music producer Phil Wiesenberger. What followed was an album of 11 original tracks duly titled Left to Lead, reflective of Atomic Solace’s place in the local music scene. Left to Lead was well received, undoubtedly because it took one back to an era where songs were more than just auditory pleasure, they had meaning, virtually a soul. The album gave rise to fan favored relative anthems such as “Tryin to Get By” and “Hold On.” The release of Left to Lead just fueled the fans fire; they were not pacified and still call out for more.

Atomic Solace showcases some of the most paramount pop/rock covers and originals. With close to 200 shows behind them, the list of followers and venues continues to grow exponentially. They have quickly become an invaluable source of entertainment, especially in the nightlife scene, keeping audiences awed and captivated until the very end. The past two years has undoubtedly produced more accomplishments than the four ever expected; so they now look to the future with a sense of realistic optimism and high anticipation.

With a successful showcase at South by Southwest 09’ behind them, the focus of Atomic Solace has now shifted back into creative overdrive. This time, with some experience now in tow, they have really been able to flesh out and fine tune their music. The response to the fruits of their laborious writing sessions has been overwhelming so far. While another tour is definitely in the near future for the band, the excitement to hit the recording studio overrules and is virtually palpable-and so that’s the next stop on this amazing ride that is Atomic Solace.

Consider yourself invited, may you find your solace…