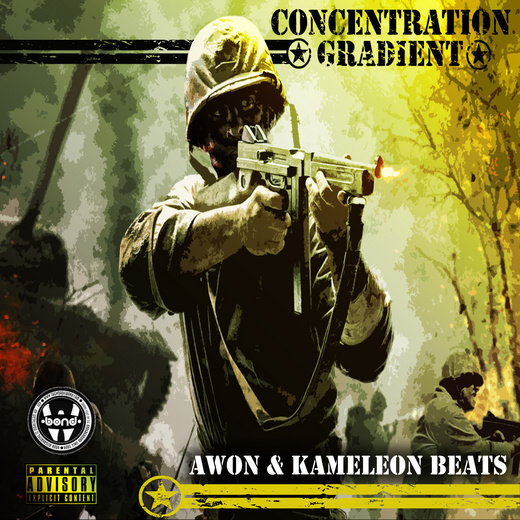 There is always room for something new and refreshing in a community that has long since been saturated with mediocrity. Hip Hop is the pillar of street culture and has influenced people across the world. Though the art form of emceeing is decades mature, there are still newcomers who use unique expression to captivate listeners. One of these emcees is Awon.

Awon, born Antwan Wiggins on March 6, 1980 in Brooklyn, New York, got to witness, first hand, a Golden Era of Hip Hop. For the first nine years of his life, Awon was a young Brooklynite and resident of the Fort Greene neighborhood. This neighborhood was a cultural epicenter for young African-American artists.Influenced early on by fellow Brooklynite Big Daddy Kane’s hit record “Ain’t No Half Steppin’” Awon became engulfed in music and decided, at that moment, to become an emcee.

Present day, you can find Awon in Newport News, Virginia, making a name for himself, internationally, via the Internet. In 2004, Awon was introduced to DJ Al Bumz and Mac The Menace, both hosts on WHOV 88.1, Hampton University’s radio station. He was soon after invited to come into the station for an interview andanxiously jumped at the opportunity to freestyle on their show, Soul Students Radio, given its name following the development of a collective they were a part of, consisting of emcees and producers.

Awon sought refuge with the Soul Students and joined the crew. Soon after, Awon began extensive recording sessions and performed live up and down the East Coast with the collective. As a member of the Soul Students, Awon secured a licensing deal with Goon Trax, a Japanese record label specializing in“jazzy” underground Hip Hop in 2007. In 2008 Goon Trax released Awon’s first studio album, the critically acclaimed, Beautiful Loser.

Currently Awon has once again teamed up with longtime friend and Soul Students producer Kameleon Beats for a follow up album entitled Love Supersedes, which is set to be released, independently, in March 2010. Gaining friends and fans from across the globe, Awon can credit his closest friends and family for helping him to achieve his dreams through their belief in his craft.

In an era where production styles tend to echo each other, it’s intriguing to discover a sound that is distinguishable from your everyday beat on the radio. Before he was old enough to ride a bike, Kameleon was a kid tucked in the basement, nodding his head and listening to classic 70s vinyl. Marvin Gaye and jazz guru Bob James flooded the air as the California native studied them and soaked up their influences. His deep-rooted love for music transcended through the years and the self-proclaimed “instrumentalist” co-created Soul Students Records at Hampton University in 2003

Gradually, Kameleon and fellow producer Al Bumz recruited a diverse team of emcees and producers: Awon, Dicap, Tiffy The Gift, Whiz, The Cubist, Mac Da Menace, Indelible, Sin, Dread, Delano and Ak. In addition to producing in-house for the Soul Students camp, Kameleon has over three thousand beats in his solo arsenal. By intricately fusing hip-hop, jazz, folk and rock, his multi-layered tracks pulsate from the speakers. The music is varied in feel, but the foundation is consistently hip-hop. Drawing inspiration from producers like RZA, Ski Beatz, 4th Disciple and DJ Premier, Kameleon is trying to bring variety back to the music world

Kameleon has also worked with R&B artists Conya Doss, K’Bana Blaq and Jon Bibbs. A firm believer in live instrumentation, Kameleon has been playing the piano, saxophone, bass and guitar for years. Along with samples and beats from scratch, Kameleon consistently sprinkles his tracks with a touch of live music to make the sound richer

Kameleon’s highly-anticipated debut, Midnight Sun, is currently available on iTunes, Amazon and other fine online retailers. The record is based around the seasons and floats comfortably between genres. From soothing to bombastic tempos, Kameleon flexes the signature sound that’s got the internet abuzz.