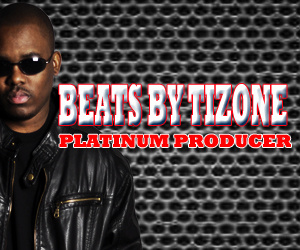 Antonio “Tizone” Street, emerged on the scene in Chicago, during a time when beat-juggling, scratching, transforming, and DJ battles were the craze. Tizone was determined at an early age to become a household name, he spent countless of hours studying and perfecting his skill. His craft and skills made Tizone stand out among the elite DJ’s in Chicago. His skill caught the eye of DJ Cooley who took Tizone under his wing and help him develop his skills as a DJ and Producer. From the turntables to the MPC 60 a whole new era began.

As a DJ, Tizone went on a tour with the Nappy Heads, which received their deal on “The Oprah Winfrey Show”. He then started to connect with major industry artists: the late great Notorious B.I.G., Craig Mack, D.O.C., Sean Diddy Combs, Tupac, Dr. Dre and many others. After the tour, Tizone began to develop his younger brother, Lil Bud and shop the demo himself. With $50 his grandfather gave him, Tizone went to Atlanta to shop his demo. After returning home with the $50 he never spent, offers came from Teddy Riley and Keith Sweat. Deciding to sign with Keith Sweat under Elektra Records, Sylvia Rhone heard a verse Tizone rapped on off Lil Bud’s album, she decided that they needed to be a group. Later the group moved to Island Records, where they received their first gold album for “Funky Sounds” off the “Don’t Be a Menace” Soundtrack. Tizone wrote and produced the song. Tizone also had a rap verse on Keith Sweat’s “Freak With Me” on Keith Sweat’s self-titled album as well as writing and producing the song “Chocolate Girl” which received multi-platinum status. He has worked directly with Legendary Mixing Engineer Peter Mokran, R. Kelly, Cheri Dennis (Bad Boy Records), L.T. Hutton, and many others on Lil Bud & Tizone album “Ghetto Wayz”. Their first single off the album, “Gonna Let U Know” feat. Keith Sweat competed with Michael Jackson and the Nortorious B.I.G for positions on the top three spots on the Billboard charts. Lil Bud and Tizone appeared on Soul Train, Teen Summit and toured with major industry artists. Tizone has also worked with Mary J Blige & R. Kelly “It’s On”, Twista “Suicide”, BrownStone “I Can’t Tell U Why”, Ol Skool “Set Your Free”, Angela Winbush, Ki-Ci & Jo-Jo and more.

While working with many of the industry greats, Tizone also helped many independent artists through his creation of Basstone Entertainment and in June 2007, Tizone founded and opened Radar Recording Studio. A recording and artist development company dedicated to “Detecting Real Talent” and providing quality music and video solutions for aspiring artists and companies. Radar Recording Studio provides both recording and artist development services to independent record labels/companies, corporations and individuals. The focus at Radar is to record quality music and video at industry standards. Radar provides its customers with a professional quality product that competes with the major record companies and corporations.

Tizone is not only a Platinum Producer, DJ, director, editor, videographer, photographer, but an extraordinary hip hop/rap artist. The release of the long awaited and anticipated solo album “The Interpretation” (2011) showcases Tizone’s ability as an extraordinary storyteller as well as a rapper with different styles that is impossible to copy. Tizone gifts and talent truly exemplify him as an extraordinary artist/producer in the music industry.