"Beggar's Ride have something special.  Yes, they have beautiful voices and beautiful harmonies, but they offer much more.  Their heartfelt lyrics and melodies are at times haunting yet uplifting.  They sing songs about real life and real people. This is one of those cd's that calls you back for more.  It's the best of what the new coffee house scene is all about." -Art Wachter, Host of The Folk Show on NPR affiliate WPSU (State College, PA

Beggar’s Ride is the Baltimore based duo of performing songwriters Claudia SanSoucie and Kate Maguire. They met in the fall of 2008 and began performing together soon after, officially forming Beggar’s Ride in the winter of 2010. Their efforts have culminated in the recording of their first full length album to be released June 7,2011.

The album was recorded and mixed at the venerable Signature Sounds studio in Pomfret, CT. Working with producer David Goodrich (Chris Smither, Peter Mulvey, Jeffrey Foucault, Red Bird) and chief engineer Mark Thayer, they set out to record an intimate, moody album featuring the interplay between their tight harmonies and lush electric and acoustic guitar textures. The album features 10 songs, all originals by SanSoucie and Maguire with the exception of the brilliant David Olney tune “Women Across the River.

Kate Maguire has been busy performing regionally since she moved to Baltimore in 2008. She was a finalist for her song "5 Days of Rain" in 2010 and Silver prize winner in the 2009 Mid Atlantic Songwriting Competition for her song “Softer Shade of Blue” from her self released EP “Leaving”. This track was also included on the 2009 GoGirls MusicFest Compilation CD.

Claudia SanSoucie has performed extensively in the Mid-Atlantic, including the Kennedy Center’s Millennium Stage, and throughout Europe. Her song “The Enemy” was selected for inclusion on the Baltimore Songwriter’s Association’s juried CD “Songs from a Charmed City”

For inquiries contact Beggar’s Ride via email at info {at} beggarsride.com 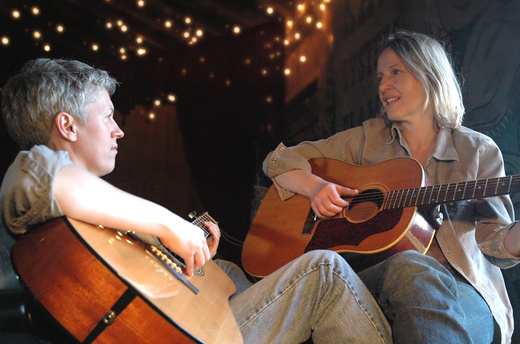