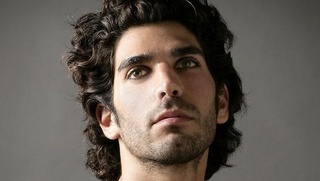 Well, I was born July 21, 1979 in Israel. I am the youngster of 12 (!) sisters and brothers (six brothers and sisters) and brought up as an orthodox child to a streaked Jewish family in Tiberias, located in the north of Israel.

From infancy, I had known music will play a big role in my life, despite of my background and maybe because of it. At age 10, I became an active member of "Flowers of Jerusalem", Israel's national choir, but due to a dramatic voice transformation I went through less than a year later, I was asked to leave the band.

As a result of that, I started to secretly compose music and write lyrics, expressing my feelings. After my military service, at age 21, I have decided to spend some time in NYC, a time I now refer to as "my second childhood".

Then spent 3 years in NYC, singing at the smallest then bigger gay clubs and bars around, (the only ones thought I worth something) but it wasn't just enough for me.

At age 26, after arriving in Europe, my first official Single "Into My Life" (Logo Records/Self/SIAE) debuted in Italy on November 2006, and with all the support I got, "Into My Life" has charted The Italian Top20 on January 2007, peaking at number 6.

Then my whole face was featured on the cover of Clubbing Magazine, distributed around Europe. These days, "Good Together", my second Single, is being released specially in Israel and I feel it's just the begining.

Here you could hear Tunisia, the third song to be released first in Tunisia, then across the deserts in the whole-wide world.