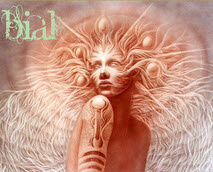 Bial is a young canadian music compositor from Quebec in Canada. Very early in his childhood, Bial devlopped a special talent with music composition, learning several instruments. Being raised in an artistic family of accrobats, he developped many differents talents. Bial started performing in Imitation shows while doing singing discovery events and breakdance with the group BREAKIT. In school, we would find Bial walking around with his guitar everywhere, even in class. As soon he would have 5 minutesfree, he would start composing.... Along with his family, who worked in the circus field as accrobats, Bial traveled a lot, getting artistic influences from different places and cultures and developped his musical influences..

He studied 5 years in music, became a very versatile guitar and piano player creating his own songs for public performances. but always prefered to stay away from the technical side of music, being a wall between the artist and his instrument. Bial started performing live at the very age of 13. In college, he creates a duo with Yannick Belanger, and enter a series of music discovery contests... Won a first prized in ''Les Stars de demain'' contest. In 1991. Bial always felt somewhat limited with musiccreation using a guitar or piano. He then started to experience with electronic instrument. Bial compose everywhere he goes, even on his iphone. As soon an idean comes up, he record it.

He, then, created the band AMALGAME along with Yannick Belanger and Ghislain Caya, one of the first french electronic music band and participated to ''L'Empire des Futures Stars BUD CKOI-FM'', one of the biggest french canadian music discovery contest; as well as the Black Label event, appeared on tv on the Telethon des Etoiles in Montreal.

In 2002, wanting to explore the world of sounds, Bial creates ANYMA with Ghislain and released in 2004 their first official music album ''Volume 1".

in 2007, he founded Amystheryum along with Marc Theriault and are actually working on their first release , Sensualis...