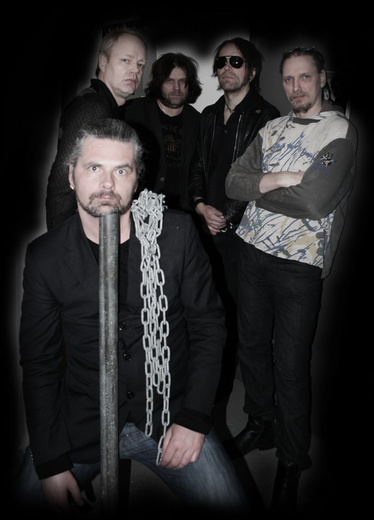 BODIES have been around. For a long time. With many restarts. But playing a music that stays intact, we still deliver the goods.

BODIES mainly play in Sweden - mostly in our hometown Stockholm - but have also been to Scotland and played to fans (that actually got us the first bookings there, just to get us over!).

BODIES have a solida reputation as a great live band that always delivers as playing in front of a packed stadium. And we are a recurring act on several locations in Stockholm. In Scotland, we received glimmering reviews. Below are a couple of excerpts from one of them, at www.loudhorizonmusic.com:

"And so not a moment too soon, BODIES took to the stage. Unfortunately, having travelled all the way from Stockholm the crowd (yeah...you know!) was embarrassingly sparse. But it didn't reflect in the performance of a really polished and professional looking and sounding band. Singing exclusively in English, vocalist Clint Hell - who was suffering from a bout of tonsillitis - was, somewhere in his mind's eye playing to a packed stadium on a warm summer's evening. With the band all wearing dark clothing, there was a uniformity that whilst belying their punk attitudes also helped create a clear and concise image that complimented their sound. With Nick's steady bass playing leading the band throughout, John added some intricate guitar-work to most tracks whilst Hans' drumming was uncompromising and yet remained unobtrusive. There was a 'clean,' sound to the whole unit, with each individual instrument clearly audible and not merging into a messy mush as quite often with punk bands."

"But BODIES are not just simply another punk band - their songs vary from the straight-up punk of 'Loser,' and 'Sicken' (two of the band's more recent compositions) to the more rock-based 'Drive,' and the old-skool punk and drama of 'Blind Brother.' There is at various points a distinct 'Euro - punk,' feel that sets them aside from more conventional punk bands in the UK and throughout the set, Clint would prostrate himself across the crowd barrier. Sometimes he would continue to sing whilst draped over it, head almost touching the venue floor and indeed at one point he stretched past the point of no return and somersaulted over the barrier ending up on his back, on the floor, amongst the crowd. (When I say 'crowd,' ......)"

Style? We think rock. Or punk'n'roll. Some think hard rock, others punk. We think -77 is great. But in a slightly more modern pace.