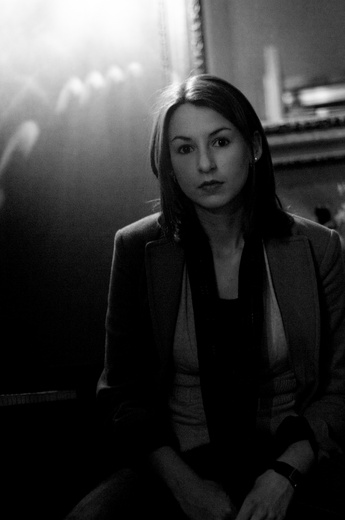 Pittsburgh singer-songwriter Brooke Annibale combines earthy vocals, insightful lyrics and acoustic pop folk sounds to create dynamic and engaging performances. Vocally, she has a smoky quality similar to John Mayer, and employs a pleasing thickness and pitch that are reminiscent of Natalie Merchant. Her lyrics bleed with an uncommon wisdom for a twenty-three-year-old, as the tales she tells about love, loss, faith and finding yourself are simultaneously deeply personal and wholly universal in their application. Brooke’s third album, Silence Worth Breaking, is her most well-rounded effort yet, featuring dreamy folk-pop, radio-ready pop-rock, edgy groove rock and even some stripped down numbers where it’s largely her and her acoustic guitar. Brooke’s music is loaded with life and gravitas, and her confidence and thought-provoking lyrics will leave you wanting to hear more when she’s done.

“Silence Worth Breaking” was recorded in Nashville, Tennessee with producer Paul Moak.  After working with Brooke in the studio Moak said, “Brooke Annibale is an artist of true depth both as a writer and a performer.  Her ability to draw you in with that voice is equally matched by what she has to say once you are there.”  Moak has worked with national artists Third Day, Jennifer Knapp, Matthew Mayfield, Mat Kearney.  The new album was funded by Brooke’s fans through a campaign on the crowd-funding website, Kickstarter.com.

Brooke’s third album follows “Memories in Melody” and “The In Between,” released in 2005 and 2008, respectively. Over the course of that time period, Brooke attended Belmont University in Nashville where she earned a degree in Music Business.  Upon graduation, she returned home to Pittsburgh to pursue her career in music both locally and nationally and has been invited to open for musicians Katie Herzig, Matthew Perryman Jones, Tony Lucca, Julian Velard, Charlie Mars, Kim Taylor, Julie Lee and Steven Delopoulos.  Most recently, she won a contest on OurStage.comto open for bands Hanson and Rooney at the Carnegie Library Music Hall.

Her new record Silence Worth Breaking was released on March 15, 2011.