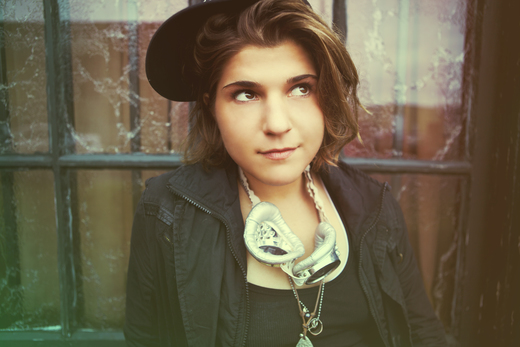 Everything Daphne Willis has done up to now in both her music and her life has led to this moment—her new album, Because I Can (Vanguard, April 19), marks the 23-year-old writer/singer/guitarist’s artistic coming of age in thrilling—and at times heart-wrenching—fashion. This captivating LP represents an exponential leap, as she grows into her enormous talent and puts it to powerful and relatable use via her singular sensibility. Because I Can sounds very much like the defining work of a young artist who matters.

“I pushed myself hard on this album, and I really let myself be pushed,” says Willis, who recently relocated to Nashville from her native Chicago. “It involved opening the door and working with new people—a lot of the songs on the record are co-writes. I learned so much from writing with all these different people and making it a collaborative effort from start to finish. It’s been a blast all the way through.”

Because I Can was produced by Nashville-based up-and-comer Tim Lauer, continuing a collaboration that began with five tracks on her full-length Vanguard debut, 2010’s What to Say. After culling songs from the 50 to 60 she’d written since the completion of the previous LP, “We started talking about how to move toward the next level, while still maintaining musical continuity from the last record,” Willis recalls. “I was fully willing to go out on a limb and try some things I’d never done before—which is the cool part of working with Tim.”

They got down to work last November, with a world-class studio band anchored by drummer Shannon Forrest (whose own Franklin, Tenn., facility The Metal Room was where most of the tracks were laid down), bassist Tony Lucido and guitarist Mike Payne. The album blossomed during overdubbing, one key ingredient being provided by trumpet or flugelhorn and trombone, a blend introduced on What to Say and perfected here; these burnished tones provide the tracks with their evocative uptown backdrops. “The horns seal the record over and give a certain color to it,” says Willis. “They play a big part in rounding it out.”

On a stylistic level, Willis evidences her complete command of every conceivable mode, from the close-miked, string-laden torch ballad “Sad” to the exultant rocker “Do What You Want,” and from the neo-funk of opening track “Shake It Off” to the simmering Memphis-style soul of “I Want To,” as she fully inhabits each of these dozen indelible songs. The album swirls with inventive melodies carrying straight-to-the-heart lyrics, delivered by Willis with a combination of technical prowess and emotional resonance. Once you’ve heard her smoky alto, you won’t soon forget it—and the same goes for the songs. She’s joined on “Circumstances” by her label mate Trevor Hall, who unreels a delightfully syncopated vocal in the bridge, and by Megan McCormick, who harmonizes and peals out a scintillating electric guitar solo on their co-write “Weatherman.”

From a thematic standpoint, Because I Can is remarkably coherent, charting a personal odyssey from tentativeness to life-embracing pro-activity, as the album’s autobiographical protagonist picks up the pieces of a life filled with disappointments (“One by One”), gives herself a pep talk (“Circumstances”), rids herself of dysfunctional relationships (“Spit It Out”) fights for the viable ones (“Weatherman”), treasures what she’s found (the sublime “I Will Be Waiting”), ultimately finding herself and moving assertively forward to seize the opportunities that life offers (“I Want To,” which yielded the perfect album title). This movement from dark to light is embodied by a key passage from the sultry, Bacharach-style groover “Is Anyone There”: “Lines all winding, grinding into others as they go/Effort feeds momentum, and it can stop if it gets too slow.”

If you really try at something and pour your heart into it, you see results,” says Willis, sounding like she’s experienced a full-on epiphany. “The whole experience of making this record has been about stepping out of my comfort zone and trying new things. That’s way I titled the album, Because I Can. It’s about moving to action. It’s there in ‘Shake It Off,’ ‘Do What You Want’ and ‘Circumstances,’ and ‘One by One’ has so much of everything that I went through, including my personal life. It was written during a really strange time; I was going through a breakup and thinking about moving to Nashville—just picking up and making a new start. But the whole album is about willingness to change and self-empowerment.”

Willis’ self-assurance and level of engagement these days make her seem quite different from the introspective 21-year-old who signed with Vanguard in 2008 and recorded the digital EP Exhibit A. “For a while,” she acknowledges, “I felt like I wanted more support from other people, and I depended on approval from my family and my significant other. I started getting frustrated creatively. And then I realized that I needed to break out, do my own thing and be more independent. Stepping up and pushing things myself definitely changed my frame of mind in the last year.”

“I’m having so much fun,” she says about what has been—and continues to be—an exhilarating and gratifying experience for her. But it’s understandable that Willis is so energized—she’s just made a career album.